Peril At End House is written by renowned suspense thriller writer Agatha Christie. It is from series which featured detective Hercule Poiret. The book I bought from Amazon.in is published by Harper Collins. It is among the ten best detective novel of Agatha Christie according to an online survey. 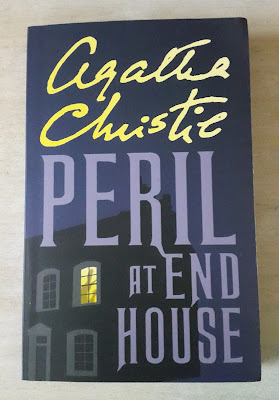 Cover and Plot: I think cover is not significant in this novel since it has changed several times in various editions since the time of its publishing. So lets talk about the plot.
Hercule Poiret is on a holiday on the Cornish Riviera where he met a girl Nick Buckley. While talking with her he discovered that someone has fired a bullet on her which has struck on her hat. On inquiry from her she describes her recent accidental brushes with death which alarmed Hercule Poiret that someone is behind her life. He started investigation to find out the reason for these attacks. He investigate everyone i.e her friends Fredrica Rice, Commander Challanger, Mr Lazarus, her neighbor Crofts and her cousin Charles Vyse. He also advised her to call someone to accompany her for her safety so she called Maggie Buckley her cousin to live with her.

Someone again tried to kill Nick but Maggie get killed because she was wearing her shawl. Now the case of attempt to murder became the case of murder. Hercule Poiret curse himself for not being alert enough to prevent that innocent death. He send Nick to nursing home for safety and no one allowed to meet her but again she was poisoned there. Will she survive this time. Who was behind all these attacks and what was the motive behind these murder attempts. Hercule Poiret deduce every angle to reach a logical conclusion which surprised the readers.

Review: Last year I became fan of Agatha Christie and read her four novels since then. This one was also interestingly weaved to bind the readers to the book. Though the narrative become slow in between the overall impact is of a fast paced suspense thriller with an surprising ending. The climax part is well build and add the drama to the narrative. I recommend you to read it at a time when you needn't have to put it down for some other work because its a kind of book you will read in one go.

Verdict: An unputdownable suspense thriller which you must read.