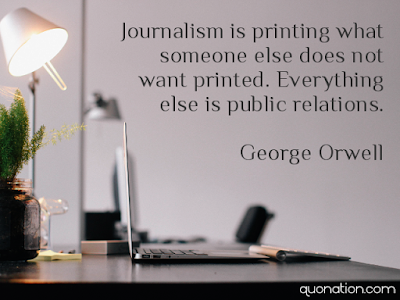 Journalism or media as it is called today is known as the fourth pillar of democracy. It keeps a check on government’s activities and maintains a balance in reporting things. It highlights any wrongdoing anywhere in the country or the world so that the associate agency can take action against the evil doers. It helps in forming public opinion on things of local and national importance. Journalists maintain a non-biased way of reporting things by not including their personal views about a particular topic.

All above mentioned things about media may sound funny if you look at today’s journalism and journalists because no where you see them helping in making public opinion but instead they manipulate public opinion according to their political affiliation. Calm and balanced news anchors are difficult to see. Even those you think are honest and fair try to impose their views due to pressures from their bosses in the media houses. The masses today go to TV news channel for the information but the information there is either one sided or based on prejudice. Some news anchors acts as police, lawyer and judge at the same time. They report on speculations and sensationalize the news. The news has now become entertainment.

The news becoming entertainment is an attack on our rights for seeking truthful information. Recently Kashmir media was gagged for two days to not report on Kashmir problem while the national media was let loose to deliver any kind of news they want. Innocents were made culprits while culprits turned messiah. The new trend of labeling anyone anti-national for speaking against the government’s policies has also gathered followers. This new way has divided the nation and creating fear among those who wants to speak truth. These ways of silencing the opinions will only kill democracy.

Media should act responsibly. They should know when/what to speak and when/what not. This doesn’t mean any kinds of curb on journalism but free and fair journalism without any pressure from the government and its agencies. The British investigations against Tony Blair revealed how he acted against decision of his party, opposition and people to declare war on Iraq only because of the vested interest of some media houses that supported him and helped making an environment of war against Iraq with America. All news of weapons of mass destruction was false which destroyed Iraq and became the precursor of ISIS.

This is my appeal to all associated with the news agencies, media houses and journalism to listen to your conscience before listening to your money making bosses. Not only India but the world needs truthful journalism for betterment of the world.
Analysis biased reporting Fresh Views journalism Kashmir crisis media media houses news channels truth