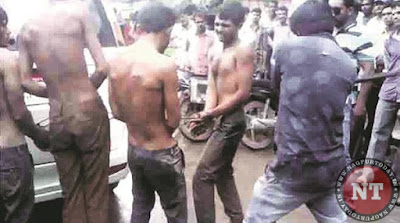 Hum Sab Ek Hain which means we are all one seems a complete nonsensical idea in the view of current situation in India where people are identified with their religions/castes and attacked for not adhering to the standards of a particular community. The recent incident of Una, Gujarat in which four lower caste Dalit youth were beaten mercilessly with Aluminium roads and paraded half naked with their hands tied behind a SUV by members of Gauraksha Dal (Cow Savers ) is an example of increasing caste based atrocities. Similar incident was also registered in another Gujarat town few days before the Una incident. Cattle transporters also faced similar attacks from such  Gauraksha Dal goons in parts of Haryana, Delhi, Jharkhand and Uttar Pradesh. The beat, molest and kill people in the name of cow.

The constitution of India considered all Indians equal but even today this equality is registered with golden words in pages of constitution only. Most of the people of so called upper caste still demean people of lower castes and treat them worse than animals. They don't tolerate their rise through education and in respectable jobs and forced them to do jobs of lower dignity. An now in garb of saving cows they are beating them for this job of skinning of dead animals which they think was appropriate for lower caste people. Why should they do this job? Why should they take the responsibility of cleaning the society?

Skinning of dead animals, cleaning of drains, sewer manholes and other such jobs were done with help of machine and technology in developed countries of the world but the people who have authority of making laws and running the administration also has a casteist mindset. They dragged lower caste people in these jobs by depriving them of respectable jobs and not bringing such technology to uplift them.

Under current central government the crime against Dalits have increased almost 60% including incidents of rape and killing. The Gujarat incident have turned violent when dalit protesters started burning buses and damaging public property, almost 11 youths drank poison of which one has died which shows people have zero trust on government in Gujarat. A BJP MLA also abused stalwart Dalit leader Mayawati which shows they saw people of lower caste with disrespect. When the people in power will set an example and stop their hate speeches then only situation will change. Till then God Bless India.
animal skinning BJP constitution of India crime against dalits Dalits Gauraksha Dal Mayawati News Una - Gujarat Views