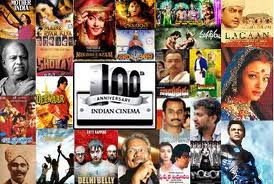 I am a die hard Hindi movie fan. I have watched almost every film released in the last two decades of my birth. The films of 50's, 60's, 70's, 80's and early 90's I have watched on television or Internet. When I revisit my film watching journey I have realized that I have learnt a lot from them. It was not only entertainment but good behavior, respecting woman, became more law abiding and a positive message that how bad things may become the end would be pleasant.

The simplicity and innocence of 50's, 60's Raju/Birju/Suraj ( Raj Kapoor, Dilip Kumar, Rajinder Kumar),  the restlessness and urge to get something of 70's and 80's Vijay, Ravi (Amitabh Bachchan, Shashi Kapoor, Rajesh Khanna) and coolness of 90's 2K's Rahul, Raj, Prem, (Shahrukh, Salman and Aamir) or the realism of today's movies all are imbibed in me, they all have taught something to me. I remember giving examples to teachers from movies to explain certain things and concepts to us in school. I usually relate things to a situation in film to find out solution and to get the way out. Yes it sometimes makes me too filmy but as they say 'Hum Sab To Upar Wale Ke Hato Ki Kathputli Hain, Wo Jaise Chalata Hai Hum Chalte Hain.'

I have learnt that truth is always victorious, ' Sach Aur Sahas Hai Jiske Mann Mein Anth Mein Jeet Usi Ki Hoti Hai' and that happiness is the final outcome of a situation, ' Agar Ending Happy Nahin Hai To Picture Abhi Baki Hai Mere Dost'. Movies gives us hope, dreams and a satisfaction that one day everything will be all right. Films told us that the corruption, poverty,terrorism and other such world problems has a solution. People said that movies have a bad influence on society but I believe that films are the mirror of society; they show what they see. Highlighting issues by them make us more aware of the happenings around.

Today 'Candle March' has became the symbol of protest which was first seen in the movie 'Rang De Basanti'. Bhagat Singh was not popular in the masses unless portrayed by Manoj Kumar in the 60's and Ajay Devgen in 2K's. Paan Singh Tomar's achievement was highlighted by a film on his name. Perhaps people also learn something bad from films but 'Bade-Bade Shehro Mein Aisi Choti-Choti Baatein Hoti Rehti Hai'. Movies keep our dreams alive and I will always give wings to my dreams through movies.

Here is a Hindi Poem written for 100 yrs of Bollywood : Sunhera Parda