The Murder of Roger Ackroyd is written by the queen of thriller Agatha Christie. This Harper Collins published book is a murder mystery. This one of a kind thriller suspense saga has a jaw-dropping effect once you know the identity of the killer. It is voted as the best case of detective Hercule Poirot. 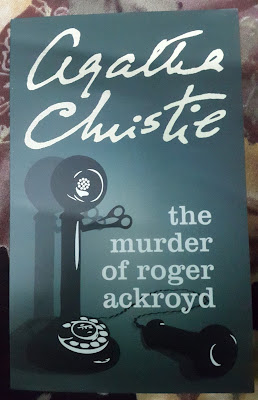 Cover : The cover of the edition which I have read has an image of an old style telephone which indicates to an important clue of the case which you will know while reading the book. The cover could be better with some more images but for suspense the less is better on the cover.

Content : Dr Sheppard who was also the narrator of the book called by Mr Roger Ackroyd a rich and influential man of King's Abbott to discuss something with him a day after the suicide of Mrs Ferrars with whom Ackroyd wanted to marry. He in his study after the dinner told Dr Sheppard that Mrs Ferrars had poisoned her husband one year ago and someone who knew her secret was blackmailing her for the same. During this conversation Mr Ackroyd received an evening mail from Mrs Ferrars which she had written to him probably disclosing name of the blackmailer. Ackroyd requested doctor to leave without telling him the name of the blackmailer since he wanted to deal with the issue himself. Dr Sheppard on his return to home received a phone call from Ackroyd's butler Parker about the death of Roger Ackroyd. He told this to her sister Caroline and left for Roger's home. Roger Ackroyd was stabbed with a knife in his study and everyone including police for circumstantial evidence believed that Roger Ackroyd was killed by Captain Ralph Paton who was Roger's stepson. Flora niece of Roger Ackroyd who was engaged to Paton knew that Hercule Poirot was leaving in their locality by hiding his real identity. She approached him for the case since she believed Paton was innocent.

Hercule Poirot's investigation brought all inmates of Roger's house i.e Flora, her mother, Raymond (Roger's secretary), Major Blunt (friend),Parker(butler), Miss Russel (housekeeper), Ursula Bourne (parlor maid) under suspicion by highlighting their false alibi or for hiding a secret. The case which looked so simple from starting became a complicated puzzle. Poirot eliminate each suspect one by one to reveal the identity of real killer.

Comment : It was not the kind of story which gripped you right from the start. I felt the author has stretched the point to bring detective Hercule Poirot in the plot but after his coming the story was a roller coaster ride of twists and suspense. Story was nicely carry forwarded from there. The drama created in many scenes transported the reader inside the story. It was difficult to guess the identity of the killer, though I guessed it with my experience in such mysteries. The author has progressed nicely with the story and finished it with an amazing climax.

Verdict : I definitely recommend it for its startling revelation about the killer's identity and for the suspense it has maintained till the end.

I have bought it from amazon.in you too can buy from there.
Agatha Christie Book Review climax Harper Collins Hercule Poirot King's Abbott Murder mystery