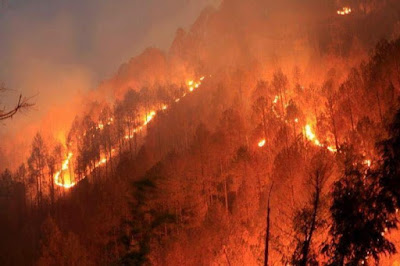 Wildfire is a natural phenomenon in many forests during summer. It helps in faster decomposition by heating soil and increasing microbial action. It also helps in clearing forest area for fresh growth and thus replenishes forests. I am not conducting a science class on the subject forest fire, this information is necessary to understand the things I am going to tell ahead in this article.

As I have mentioned wildfire is a natural phenomenon, it also happens in the forests of Uttarakhand and Himachal Pradesh the two Indian states having most of the forest cover in the northern India. It usually started in February and ends with the monsoon. They are not of high scale and damage if occurred is controllable naturally but 95% forest fire in India is due to man maid reasons like burning dry leaves by villagers, honey collectors using fire to send away bees, falling or touching of high tension wires with trees, drug traffickers using it to clear their ways,etc. It was happening from past so many years but local people used to control that kind of fire but the fire spreading this year is burning from 80 days and have affected 4500 hectares of forest area in Himachal Pradesh and 3185 hectares in Uttarakhand with 80+ fire incidents at different region. Now due to lack of jobs and employment options in hilly areas people are migrating to cities leaving their villages vacant and less habitation in these areas which made these fires to spread in the jungle from small area of origin. They remain unnoticed because of fewer inhabitant in this region.

Our forests have reduced to half from what they are 25 years before due to illegal cutting of trees by wood merchants, unplanned development models by governments and ignorance of common man. Such uncontrolled fire will further destroy our green covers and imbalance our fragile ecosystem. It should also be noted that current fire have also killed animals and birds including migratory birds when it spread to wildlife sanctuary in Agra and other areas. The governments of both states and centre have acted now almost after three months to the seriousness of this fire. NDRF(National Disaster and Relief Force) and IAF (Indian Air Force) along with forest departments are trying hard to stop spreading of fire.

I hope they soon get control over the fire and investigate the reasons behind it to punish the wrongdoers. Also measures should be taken to check further incidents of human made fire. Employment opportunities should also be increased in these regions so that people don't migrate into cities and help conserving their forest lands. God bless flora and fauna of Uttarakhand and Himachal Pradesh. God Bless India.
Agra bird sanctuary ecosystem flora & fauna forest fire Himachal Pradesh IAF NDRF Uttarakhand wildfire