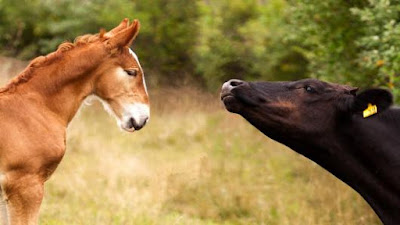 Shaktimaan the police horse who was seriously injured during BJP protest in Dehradun is now demanding a species change operation. After amputation of his leg Shaktimaan and other police horses are demanding species change from horses to cows. While they were being attacked for being in police force 'Gau Raksha Samiti' of different states are attacking people for harming cows. They too were demanding such kind of Z plus security in which instead of harming them humans would kill humans.

A horse on promise of anonymity has revealed that they are in touch of doctors in America for this operation. He referred to Jharkhand incident where two cattle traders were hanged to death for protecting cows as the precursor of this idea. He added that people are attacking them while they are going to the extent of killing for saving cows. He also told us about their application for government aid for this operation.

According to some sources they will head to US once Shaktimaan's recovers from his injury. Other animals like dogs, bulls, buffaloes,etc are also discussing this option for respect in this cows' world. Experts believed if the condition persist some humans may also opt for this operation.
BJP Dehradun Fresh Views Jharkhand Cattle Traders Hanging Satire Shaktimaan Police Horse species