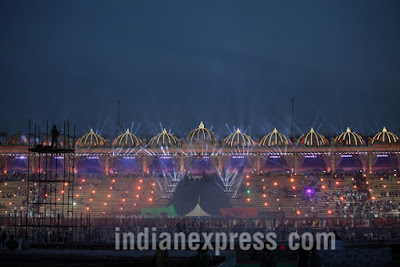 In ancient times saints and sages used to sit Nadiya Ke Uss Par or across the river to meditate in calmness for the world peace and order. Today a contemporary saint has taken this practice to an all new height to teach the world his art of living here in Delhi on Yamuna flood basin. Ever shrinking river Yamuna has reduced to a drain by negligence of government and ignorance of Delhihites is now posing a threat of irreparable loss to its flood basin due to this World Cultural Festival.

Rivers were never our government's priority not even when we consider them as god and not even after so many programs running from so many years to save them. 60% sewage water goes straight into the river Yamuna without treatment. It is on the verge of extinction when 57 million people are directly dependent on its water including farmers and fisherman. The various NGO's are working towards replenishment of the river but unless there is a strong will from both the central and the state government the river's condition is not going to recover.

The Congress government neglected Yamuna during the construction of Commonwealth's Game Village and also during the construction of Akshardham Temple and now both the government in the center and state which boost their quality of being different from Congress are doing the same mistake by giving nod to this cultural festival which causing immeasurable and irreparable loss to the river( according to NGT ruling before festival starts). The presence of Prime Minister Narender Modi and Chief Minister Arvind Kejriwal in this function shows their indifferent attitude towards environment and ecology.

The decision of using army to make a bridge for a private function is also under scanner but I give so called nationalists opportunity to critique that action my concern here is the river which is facing a slow death in phases. The effect of encroaching natural lakes and rivers we have seen time and again in Uttarakhand, Kashmir and recently in Chennai yet we are not caring about nature. Those who are buying flats and attending festivals are equally responsible for the damage caused to the river than those who are building permanent and temporary constructions in flood basin.

Sometimes I think our Parliament or Delhi assembly building should be near Yamuna so that they would have acted like British Parliament had acted after unbearable foul smell from river Thames. The time has come to value a political party not only on the ability of fulfilling basic necessities but also on its ability of safeguarding nature and its resources. I would have appreciated Sri Sri Ravi Shankar if he has changed the venue to some stadium after realizing his mistake rather than sticking to a wrong decision.

I don't know even after pointing out so much negativity in our society, politics religion, culture and traditions I still hope for a better future for a better society perhaps because there are still many people who are working for a new dawn. Till next post God Bless India.
Arvind Kejrivaal Delhihites environment flood-basin Narender Modi Social Issues Sri Sri Ravi Shankar World Cultural Festival Yamuna