Ramayana The Game of Life - Stolen Hope is the third book of The Game of Life series by Shubha Vilas. The book is published by Jaico Books. I have received this book from author who has also penned a beautiful personal message for me along with his signature. This book starts with Rama, Lakshmana and Sita's years in exile and ends with Sita's kidnap by King of Lanka Ravana. Read Review of Book -2 Here : The Game of Life - Shattered Dreams. 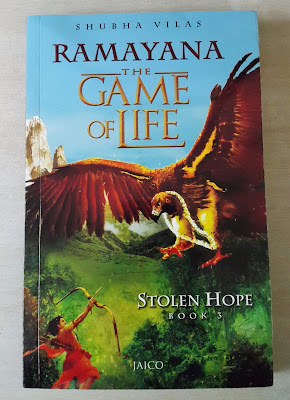 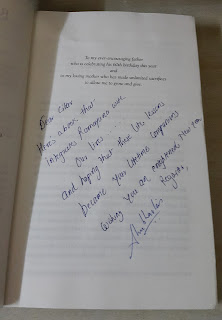 Cover : Cover depicts Rama's encounter with Jatayu. Jatayu who has an important role to play in this book appears apt to me on cover but featuring Sita's kidnapping on cover would have been better idea. Perhaps he has maintained the series's cover continuity to feature Rama on cover.

Plot: Rama, Sita and Lakshmana were spending their exile days happily in the forest. Lakshmana did his best to serve his worshiped brother and sister-in-law. They met various sages and helped them in getting rid from demons and monsters. They also met celebrated sage Agastya and learned about his legends from one of his disciples. Finally they set in the domain of Panchavati where they met Jatayu a giant bird who was guardian of that part of jungle. He was also the friend of their father and requested them to give pleasure to guard them from sitting high up the mountain. The part of the forest they were living came in the territory of Ravana and hence ruled by the demons. Suparnakha ,Ravan's sister spotted their dwelling place and fell for Rama and Lakshmana which lead to Rama's deadly fight with demons. Will they survive the onslaught of thousands of demon forces? How Ravana came and kidnap Sita? All these questions are answered in this wonderful book.

Highs : As I mentioned in my review of the second book the author has recorded the incidents as a true devotee and he has done a wonderful job.  His footnotes and explanations of some scenarios give readers detailed insight into these events and helped reader to understand relevance of Ramayana in modern times. The language is simple and soft. The narration take you deeper into the minds of the characters and help you to know the reasons of their particular action. I also liked the back stories of sage Agastya, its incorporation in the plot makes it more interesting.

Lows: It is difficult to criticize such works but I found this part a bit slow in narration at certain points. The story get stable in those points. The Sita's character is not highlighted much and her perspective on issues is missing in this book.

Verdict : A must read for all those who want to understand Ramayana better and for its relevance in today's time.