'Hatred does not cease by hatred, but only by love; this is the eternal rule - Buddha' 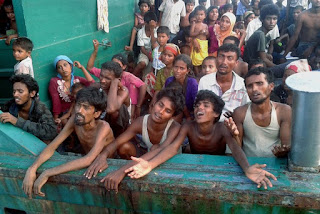 In a world where people are fighting and protesting for better life to live in their state,country or territory there are humans who are floating on sea in search of land where they can place their feet after being thrown out from their own country. Rohingya Muslims of Burma are struggling to live a normal life.

They're denied citizenship, forced into manual labor on government projects and forbidden to marry without official permission. Burma's Rohingya Muslims are often called one of the world's most persecuted people, and now they are turning to dangerous methods to change their fate. In harrowing attempts to migrate to nearby countries such as Malaysia and Indonesia, many Rohingya ended up stuck on overcrowded boats at sea, with no country willing to grant them safe landing. Hundreds of others have died when such migrant boats capsized. 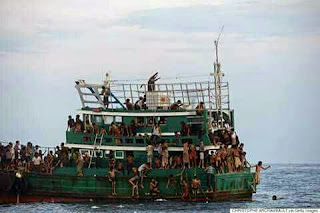 Buddhists majority in Burma (Myanmar) considered them migrant from Bangladesh denying the fact that their ancestors were living there since the British period. These Muslims were laborers from Bengal region of undivided India who were sent to work for British companies in farms and industries in Burma by Britishers. The military ruled Burma government denied them citizenship since 1982 and with citizenship it seems their right to live have also been abolished. They were not allowed to go to school, they were not allowed to do business outside Rakhine area and were tortured to leave even that small area where their population is confined.


The persecution of Burma Muslims came into light after they were found stranded on boards at the coast of neighboring countries in big fishing boards in pathetic condition. No country is allowing them to enter their land, some of these were caught by smugglers who demanded ransom for their release from their families failing to which these kidnapped people were killed and buried in coastal areas of Thailand, Malaysia and Indonesia. 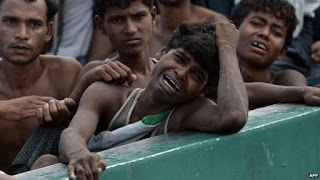 The main stream Indian media and also the most of international media is not reporting this issue as it should be raised for this inhuman act of hostility by Burma Buddhists. This is also hard to understand why peace advocating Buddhists monks are resorting to such violent means. They are butchering small children, women, men mercilessly to throw them out of Burma. The world is silent on this issue,with this post I appeal all Human Right activists to take matter to the authorities and we should all stand in their support to help them win the very necessity of being human i.e the right to live. I hope and pray that these floating human get some ground beneath their feet.
boats Buddhism Buddhist Bin Laden Burma Muslims Gautam Buddha humanity Indonesia inhuman Myanmar persecution of Muslims in Burma Rohingya Muslims Social Issues