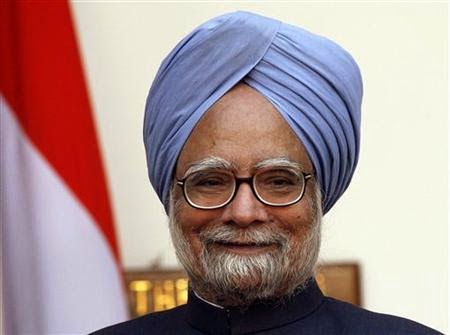 Since elections are over its time to say farewell to our current Prime Minister Manmohan Singh, I am not assuming any election results but he wants to vacate that seat for someone else even if congress came to power. He is the only PM after Jawaharlal Nehru to return to power after completing a full five-year term and the first Sikh to hold the office.

He served in the past as a Chief Economic Advisor,Reserve Bank governor,head of Planning Commission,leader of opposition in Rajya Sabha, Finance Minister under P.V.Narsimha Rao's . As a finance minister he holds the credit to bring out India from severe economic crisis in early nineties through various reforms that liberalised India's economy. He faced criticism at that time in India but he was admired globally for his work.

He is 13th PM of India,the number thirteenth became unlucky for him during his second tenure as everyday was a bad hair day for him due to scams which are competing to be at the top spot in terms of loss to India's economy. These scams engulfed achievements of his ten years as opposition extracted an opportunity from these scams to malign his reputation and labeling him as mute PM.

I think non-promotion of his work among masses,mishandling of media trials during Anna Movement and Delhi gang rape case went against him. Although he was not directly involved in any scams but as the head of the government all slur was faced by him. He was an apolitical person and he remained one by not indulging in dirty political tactics of abusing his critics. It is also necessary to mention that he never went on holidays in last ten years as PM even he never extended his foreign trips for recreational purposes.

Now, when he is putting weight of his shoulders, I wants to remember him as the most humble PM of India ,a man of uncommon decency and grace. Perhaps his stature is compromised in last two years and many countrymen criticize him but I believe what he said in his words that the history would remember his contributions for the country. My first vote in 2009 helped him form the government which was also the reason he holds a special place in my heart as a leader and as a PM. A grand salute to him and the best of luck for his future. It is difficult to find one in politics but he is my role model for maintaining a dignity of PM post and for enhancing India's image in world forums.