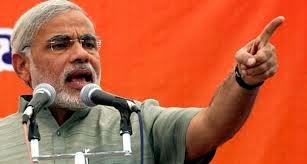 Results of Indian General Election 2014 yesterday gave a new national leader to the country in the form of Mr. Narender Modi. His rise is a case study for marketing and advertising people. He was present everywhere during election campaign whether it is news channels,newspapers,facebook,twitter,T-shirts,tea cups,Modi comics, chai pe charcha,3D rallies,etc which helped him reach maximum number of people and making an impact in their minds which other political parties failed to do. His mannerism and controversial behavior also helped him gain popularity.

Emergence of Narender Modi also helped people rise above caste politics which destroyed political presence of regional parties eliminating possibilities of their role as king or kingmaker as in last twenty-five years. These parties formed due to regional aspirations of each became mere pressure groups in coalition governments restricting governments to take any strong steps. Women reservation bill,Janlokpal bill, food security bill, targeted violence bill are some important bills and acts which remain hanging between the two houses of the parliament thanks to these regional parties. We know some parts of the country needs more attention than the others - the main demand of the regional parties however they failed to do so when came to power in their areas barring the few.

As gaining the majority was a tough task for him so is the running of new government owing to the world economic crises which India is also facing. I think he knew this for which he raised the time limit from 60 to 120 months in his thank you speech in Ahmedabad after results were declared. In his election campaign speeches he made so much promises that completing them would be hard nut to crack as Oh Yes Abhi ! generation wanted everything immediately. It is not so that Manmohan Singh's government was not doing anything but the condition was so much worse that something extra is required to control inflation,generating employment, improving farmers condition,etc. ( You can check Manmohan Singh's efforts here.)

Modi's election campaign was much like Shah Rukh Khan's promotion of Ra.One. He with his presence at every platform during the release of the film made sure that everyone must watch that movie once similarly Modi brought people to vote for him once. Shah Rukh 's effort resulted in good box office collection for the otherwise flop film and Modi's efforts ensured  BJP Modi government of party with many differences among them. The coming of Modi government and not the BJP government gave scope to dictatorial tendencies.( I noticed a bit arrogance in his yesterday's speech.)

Question mark at the end of my title shows my doubt about good days since India of 1.25 billion population is entirely different from a wealthy Gujarat state of 60 million people. Also there must be some expectations of RSS (Rashtriya Swayamsevak Sangh ) parent organisation of BJP(Bhartiya Janata Party ) who devoted all his powers in promoting PM Modi and of those people who have spent enormous amount of money in his public rallies and meetings, how he handle this would also be interesting. Moreover a large population is feeling insecure under his leadership, to inculcate faith in them would be a daunting task. Congratulations and best of luck to him for the future only time will tell how positive or negative will be MODI-fication of politics.
Linking to Wednesday Prompt 2014 #15 by Write Tribe.
BJP General Election Gujrat Manmohan Singh marketing Modi Sarkar Narender Modi politics Ra.One regional parties. Shah Rukh Khan