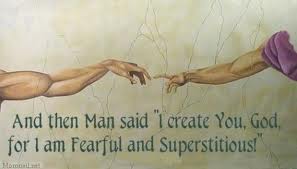 India is the land of yogis and spiritual teachers. People from all around the world came here in search of peace and salvation through spiritual teachers. These teachers are also in demand in foreign lands where they are invited to share their believes and there they also teaches the ways to connect to god. This demand helps in booming of God men in India( don't forget the money involved in all this).

The concept of mediator between God and believers is as old as the concept of god itself. These few peoples(pandits,maulvis,priests,etc) claims to hold the sole responsibility to make people connect to god. With years this trade flourishes more than any other trade in the world as a result these middlemen soon became self proclaimed  God man as influx of money in this trade is beyond any economic crises. They also became source of political power. Political parties used them to strengthen their vote banks,they are also used to keep black money by politicians and industrialists,they illegally send people from one country to another behind their truth speech delivery programme,their places in many cases becomes hideout for anti-social elements.

These so called God men uses religion as a shield to hide their ill deeds ,there are many cases like Swami Bhimanand, Swami Pramanad, Gulzar Ahmad Bhat, Swami Nityanand,Asaram Bapu,Nirmal Baba,Baba Ramdev and many more who were involved in many cases of sexual assaults ,rape,possession of  illegal property,murders,extortion's,etc. Even after such big allegations they move freely in the society due to people who blindly follows them and consider them as God. Politicians remain silent in such issues as they need these good people for their political gains.

The clause of equality before law fails in front of such people of high social status which further decreases trust in already paralyzed judicial system. We go to these people in search of god as we are afraid of Him and pay huge sum of money to wash away our sins. It's time that we start to love god,this love will remove all our fears related to Him and make us more closer to him so that a requirement for a middleman will not be there. God resides in his creations and not in temples and mosques,respect and care for his creations,He will care for you.
Asaram Bapu Baba Ramdev Fresh Views God maulvis pandits priests spiritual teachers