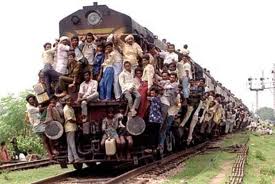 We all know about the Spain train crash which kills about 80 people on Wednesday through media reports,this incident ignited another thought in me about our country. This Spanish train was carrying only 247 people in its peak time i.e for the pilgrimage destination Santiago de Compostela which is a very rare situation for such pilgrimage in India.

During festive seasons for Chatt Puja in Bihar or for Kumbh Mela in Allahabad our train runs with out of capacity passengers which carry thousands sitting inside as well as outside on top of the trains.A train carrying only 247 passengers may appear a joke for us because we see much more people only in a single carriage of a train. This is not because we have very few trains,our railway system is one of the biggest in the world but the problem lies in the fact that we are second most populated country in the world.

Our population is increasing rapidly and soon we will overtake China to be the most populated country in the world. With ever increasing population all arrangements becomes short,our resources are burdened with over population. We are now short of land,water and other such basic necessities of life due to which we excessively use our natural resources disturbing our flora and fauna without giving a thought for the future. Ever increasing population is burden for the nation and hindrance in our development. This is the reason that we have so many people die out of hunger,youth is unemployed,literacy rate is below average,malnutrition and many other problems.

There is a need to create awareness about this problem among the masses,programmes run by government to control population boom should be implemented more strictly and to the villages of India. With population increases hands with hands increases demands and when demand crosses the thresh hold system collapses. The slogan of "we two our two" of eighties and nineties should now be changed to "we two our one".
Chatt Puja Fresh Views Khumb Mela Population boom Santiago de Compostela Spain Train Crash we two our one we two our two