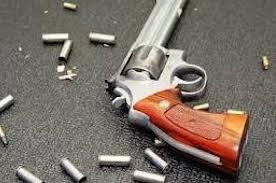 An encounter is a euphemism used in South Asia,especially in India to describe extrajudicial killings in which police or armed forces shoot down suspected gangsters and terrorists in gun battles. It started from Mumbai in India with killing of gangster Manya Surve,in year 1982 after that Mumbai police killed many gangsters to remove crime from the city. It was also used by many other state police departments in a move to give on the spot justice.

Encounter killings are criticized by human right commissions as it devoid alleged criminal a chance for a fair trial in the court of law. But if we look this phenomenon in a different light we pat police for there work. There are thousands and lacks of cases pending in Indian courts waiting for justice,cases of these dangerous criminals only add burden on our judicial system. Those killed by police in encounters are gangsters and terrorists dangerous for society police killed them when they try to escape from police custody and res torts to gun battles. These gangsters and terrorists are those who don't show much sign of improvement if provides opportunity to do so and hence there killing is justified by police in such encounters.

But as I maintains that there is always an other side of the story,since encounter killings are started it's misuse has also been in the run. Many innocent youths are targeted by police force in various states on charges of terror links and killed by police in encounters without judicial hearing many of such killings were confirmed as fake by Indian authorities. When we can kept a terrorist like Ajmal Kasab and gave him a lawyer to fight his case than why these young boys and girls were killed without giving a chance?Why criminals escape so easily from police custody?From where they get guns while in jail?Why police don't try to arrest the criminals alive?Why our intelligence don't have any information of such terrorist activities?Why encounters always remain in doubt?There are many such questions answers of which we might never get. Police is for our safety and must not act as licensed killers or used by politicians for there political gain and to hide there wrong doing.