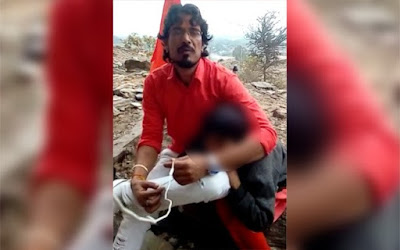 Great India to Hate India! What have we done to ourselves and why? In last three and a half years the propagandists have reduced a large population to murderers in the name of religion which has actually nothing to do with it. A Muslim laborer Afrazul Khan from West Bengal was brutally killed by Shambhunath Raiger in Rajsmand district of Rajasthan on issue of so called ‘Love Jihad’. Afrazul was attacked with ax and then burned alive by Shambhunath and his teenage nephew recorded all that was happening along with message of Shambhunath in which he shows no regret for the killing. The video is later circulated shamelessly. Think of his teenage nephew who was filled with so much hate that he can't stopped his uncle but filmed the killing.

Was this done by Shambhunath alone? The answer strangely comes to a big no because this is the result of hate mongering against Muslim population brewing in the name of Love Jihad, outsiders, terrorists, Pakistan agent, Beef eater, cow killer, etc. Both the social media and mainstream media are equally responsible for giving wind to this fire. False news is circulated through facebook and whatsapp group throughout India in a way they appear truth and thus make many believe to this false stories. Sadly many of us do take interest in these stories by further spreading them.
When before last three and a half years you heard about a mob attacking someone for keeping meat in his fridge, or for buying cattle for his dairy business, or drivers killed & hanged just for transporting cows from one place to another, or a boy murdered by a group for wearing a skull cap in train, or this recent one when a Muslim is killed just on suspicion of trying to marry a Hindu girl? Some people/political parties/organizations are trying to make you murders and you are becoming one as mutely being a spectator to all this nonsense is also equals to supporting the brutality. Invoking incidents/personalities of the past which has no one seen and which cannot be changed someone is snatching a beautiful present from you plus not letting you to think about the glorious future we all can make together as Indians.

Here counting Muslim contributions to India will also make me believe that Muslims are outsiders and did something great for the country they came while the truth is that Muslims are as much part of India as anyone else and what they did was their duty. Ignoring debates on poverty, farmers’ issues, Dalit issues, education, healthcare, police reforms will only worsen the situation of the country. By neglecting them we can hide from them but can’t solve them.