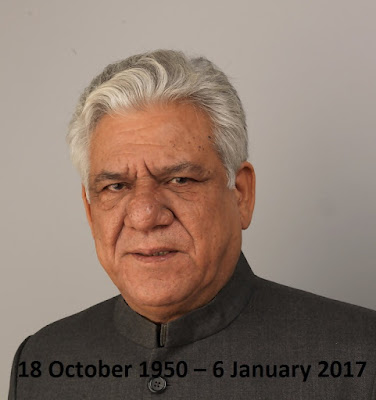 Om Puri is one actor who has worked both in Indian and International cinema garnering accolades in British and American cinema along with his successful run in Indian Cinema. He was a fellow of National School of Drama with Naseerudin Shah and later joined Film & Television Institute of India (FTII) , Pune also with Naseerudin Shah and he started his career like him in the Art Wave Cinema of the 80's but easily adapted himself to the commercial cinema later on in his career. I think a good actor is one who needs good films whatever be their medium and whatever be their audience. He was such an actor who won hearts of every kind of audience. Today on 6th January 2017 he died in his home of cardiac arrest.

In his last days he almost remained in controversies for sharing his views in the various topic in the mainstream media. Most recently he was criticized for his comments on Indian Army for which he later apologized. Questions were also raised for his comments during Anti-National debates. His second wife's allegation of domestic violence on him also garnered the headlines. Leaving apart the controversies; he was known for sharing his comments openly on various national and international issues. He has won various awards in international and national platform including BAFTA, National Awards and Filmfare Awards. You can read more about his personal and professional life Here.

He has done great roles in various categories and has equally justified his each role. His role of a villain in Narsimha, Honest Inspector/Army-man in movies like Ghayal, Gupt, China Gate, Pyaar To Hona Hi Tha,etc. Or his comic roles in the movies Hera Pheri, Chor Machaye Shor, Mere Baap Pehle Aap, Dulhan Hum Le Jaenge, Chachi 420, Chup Chup Ke ,etc are all examples of his versatility and acting prowess. Except these commercial successes he has won awards in art cinema for his roles in films like Jaane Bhi Do Yaro, Aakrosh, Arohan, Ardh Satya, etc.

We will remember him as a great actor who remained an important part of every film he has acted in and for popularizing Indian cinema internationally by acting in films there. I wants to mention Late Mehmood's one comment for him in his interview I watched years ago in which he referred him as the great actor having so many holes in his face to filled with about half kg mince meat as he forgot his name at that time. Rest in peace Mr Om Puri your vocal attitude on issues will be missed by this generation.