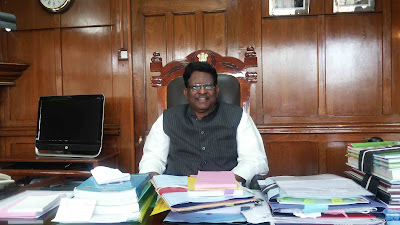 V. Shanmuganathan resigned yesterday i.e on 26th January 2017 from the post of Governor of Meghalaya and Arunanchal Pradesh (having additional charge of AP state) after staff of Raj Bhavan complained to President and Prime Minister of his indecent behavior and reducing his office to the ladies only club. He was in this position for being a loyal RSS and BJP activist that RSS whose cadres prefers to remain unmarried in order to their promise of serving the nation and society. What an irony?

The post of governor which is already useless and is there for political benefits of the veterans of ruling party. This post act as retirement plan for the aged politicians and often interfere with functioning of non-ruling party state governments on command of the ruling central government who has appointed him. This post serves as a political tool which was often accused by non-ruling party state chief ministers as agents of the central government. The post which should be mark of dignity have lost its stature in recent years and this behavior of V. Shanmugunathan has further demean the grace of this post.

The Raj Bhawan of Meghalaya staff has also accused him of sexual offences. They said that he has compromised the security of the Raj Bhawan by giving some young ladies free access to his bedroom anytime of the day. By preferring only ladies staff he has displayed his vulgar intentions only. It is evident that government has pressurized him to resign after such complaints but such act of indiscipline should also be punished to set an example for future governors. Not only this behavior but acts like snooping of elected government of the state, hindering in government's functioning and trying to impose his party's agenda in the state should also be prohibited and punished as it is an unconstitutional and undignified act.

Removal of V. Shanmuganathan give the benefits of this post to another veteran loyalist of the BJP and RSS and will settle the goals of their old age. Unless this post remains. God Bless India.
current affairs governor Governor of Meghalaya indecent behavior Ladies Only Club Raj Bhawan staff RSS sexual offences V.Shanmuganathan