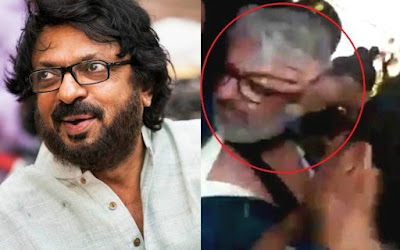 Sanjay Leela Bhansali is a name which not requires any introduction. The kind of work he has done through his films Khamoshi, Hum Dil De Chuke Sanam, Devdaas, Black, Sanwariya, Guzarish, Ram-Leela, Bajirao Mastani , etc has not only shows his skills of a showmanship who makes poetry in motion kind of cinema but also his ability to show Indian customs and traditions to the world. He through his films has made India proud in the international arena. The praises he receives from world over are praises for not only him but for the country he belongs.

Here I am highlighting his achievements because he faced a disgusting and disgraceful behavior from a headline grabbing Hindu Karni Sena who attacked him while he was filming for his upcoming movie Padmavati in Jaipur, Rajasthan. This so called history savers were against him for allegedly distorting history while filming for Padmavati. They who didn't even know about the script of the movie, who didn't involve in the film process without seeing anything claimed that film showing Rajput princess Padmavati in bad light. It should be noted that this group remained inactive for their rights when there is no TV or film involved while register violent protest at such occasions. They even disrupted shooting of Ashutosh Gowarikar's Jodha Akbar and Zee Media's show of the same name. They get fame by doing such things.

More interesting is the fact that Rajasthan Government has not taken any strong steps against them in previous occasions and this time too they were arrested only when media pressurized them to do so and I didn't know about there current whereabouts. I am sure they were released since they are political vote banks. Every time there is a historic film or a film with any religious reference such groups stands from nowhere to disturb freedom of expression without any concrete proof that film is doing anything like that. Recently AR Rahman has also faced a fatwa for being involved in a film music based on Prophet Mohammad. Similar incidents has also happened in the past also.

Films, books, TV, newspapers , etc are easy targets for these fundamentalists who are self proclaimed guardians of tradition and religions. They grab headlines in this process and no strong actions by politicians for fear of losing vote-banks has further strengthen them. Freedom of expression must be respected and safeguarded by our governments. Filmmakers should also avoid unnecessary controversies by deliberately mention anything which hurts someone's sentiments. People should wait till the release of the film before taking any action against the film and people involved. Today I am standing in solidarity with Sanjay Leela Bhansali and his crew for this unconstitutional behavior against him.
AR Rehman filmmakers Freedom of Expression Hindu Karni Sena India Series Jodha Akbar News Padmavati Prophet Mohammad Rajput Sanjay Leela Bhansali vote bank