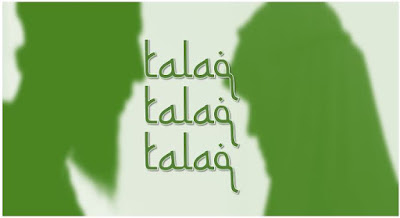 The public image of triple talaq (divorce) comes mainly from the movie 'Nikaah' 1982 which has shown male actor divorcing his wife just by saying the word 'Talaq' thrice in anger. This film actually shows the misuse of it rather than the correct procedure of divorce in Islam. In practical practice also there are many such cases of triple talaq where maulvis (Islamic preachers) have validated these divorces which have raised the issue of injustice to women in Islam. It has also become the initiator for bringing Uniform Civil Code (UCC) and to target the Muslim community. The questionnaire on law commission's website mainly points out some Muslim practices in generating public opinion on the UCC whereas it should be an endeavor for common laws for all.

Quran termed divorce as an unavoidable practice and say to use it when no other option is available. In Quran 65:1 Surat al Talaq give a detail account of procedure of divorce. Saying the word talaq (I divorce you) thrice is considered as first divorce and there is a reconciliation time of three menstrual periods before pronouncing the second and third divorce which broke the marriage completely. Thus reconciliation period of around six months is there before marriage is termed as annulled much similar to the modern day practice of divorce in Indian law. There is also a condition that a husband can't divorce his pregnant wife. In case of divorce there are also directions on maintenance of woman and the children born out of wedding. The patriarchal society which governed mostly by men, the maulvis (Muslim preachers) who become the self proclaimed flag bearer of Islamic practices has manipulated this law to the comfort of man which let the women suffers. Some Muslim clerics in their ignorance and influence of money even allow divorce through Whats App messages,emails and through Skype which have created the bad impression for the community.

This should also be noted that in spite of triple talaq practices the case of divorce is less in Muslim community and the law of the land is applicable if anything wrong happened in the marriage or after the divorce. Those who advocate Uniform Civil Code (UCC) must call for removal of different practices of different religions for marriage, divorce, inheritance, etc and not just Islam. Right now the government has not proposed any draft for the civil code so I am unable to understand whether it will include abolishing of tax benefit to Hindu Unified Family, removal of Kanyadaan which portrays girl as a commodity with other gifts, Jain practice of Santhara will be criminal or not, the right of state governments to make laws in the related topics will be there or not after the UCC. There are many questions which are unanswered in bringing UCC and only triple talaq debate is put forward for its enactment. The current controversy looks more as a step to polarize the coming state elections than an endeavor in the way of UCC.

I have tried to elaborate triple talaq here and the controversy regarding the debate on it. Uniform Civil Code and Triple Talaq are two different issues bringing them together will only create confusion and fear in the community. Questions/suggestions are welcome in this post's comment section. Till next post God Bless India
Analysis divorce India Series Islam Law Commission marriage Muslims Quran Surat-at-Talaq Triple Talaq Uniform Civil Code