Anya's Lyric is written by Nikhil Kumar. It is a story about the journey of a girl with learning disability to find peace from the chaos of her life. I have received this book as a part of Book Review Program by Readers Cosmos. 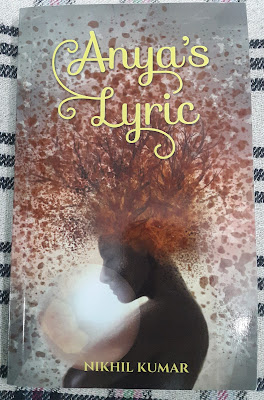 Cover: Beautiful cover design. It is artistic and gives you a glimpse of scattered life of a girl in the form of leaves falling from the tree. The girl I imagine depicts Anya whose story is told in the book.

Plot: A girl is born to a postman with one hand as a result of love making with his wife on the day he lost his job for failing to deliver a letter because of his inability to read the address correctly. They named her Anya meaning different. She was a special child who understands things differently. When she was just eight years old, her father the man with the one hand discovered adultery of her mother and killed her. The story then has small stories or incidents experienced by her on course of her journey with her father. At the age of sixteen her father died and she fell on the trap of a prostitute racket. How she escape from there and how the chaos of her life ended makes the climax of the story.

Highs: I like the idea of not naming any character because the story is going on with the perspective of Anya who is slow in learning and has disability. The chapters written in an engrossing way. The confused state of mind of Anya is developed well with the story in a lyrical way.

Lows: The unconnected chapters creates confusion and it became really difficult to figure out what is happening in a particular chapter when something else has happened in the previous one. The story has no twist and turns. It is just a recollection of thoughts by the character named Anya. If we take book as a complete story you feel bored.

Verdict: Read to know how a male writer describes thoughts from a female's perspective.

Rating: I will give it 2/5.
Anya's Lyric Book Review learning disability man with the one hand Nikhil Kumar Reader's Cosmos