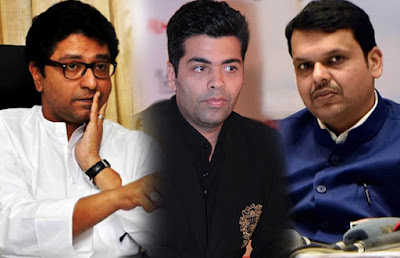 Maharashtra CM Devendra Fadnavis is offering a great scheme for all those who wish to skip the police action against any hooliganism and goondaism. Raj Thackerey the chief of Maharashtra Navnirman Sena (MNS) is the first recipient of this scheme. Devendra Fadnavis called him to his office after his party workers started threatening Cinema owners against screening of Karan Johar's Ae Dil Hai Mushkil for having a Pakistani actor Fawad Khan. In a closed door meeting where Karan Johar was also present mediator Devendra Fadnavis gave go ahead to the idea of Raj Thackerey of depositing 5 crore Indian rupees by the film producers in an army fund in lieu of allowing Pakistan actor staring film screening in Mumbai and Maharashtra.

Kofee with Karan host was delighted with this handsome ransom saving him from financial and artistic loss. Experts believe this idea could be a game changer as parties like MNS & Shiv Sena could help contribute millions to the army fund since many film released in India are opposed by them regularly. MNS sources told that they now for the sake of the country would find more faults in the film to protest against them and then demand to contribute in the army fund which would depend on the budget of the film. Farhan Akhtar and Sharukh Khan who are the producers of another Pakistan actor Mahira Khan staring film appreciated this step and asked if they need to deposit this amount before or after the protest for their film started by MNS workers.

Sources close to the Maharashtra CM believes that he may extend this scheme for gangsters, smugglers and thieves by asking them what they demand for stopping their illegal activities and still look patriotic in front of the nation. Previous governments were criticized by those filmmakers whose films were protested by MNS and Shiv Sena then for not thinking about this wonderful idea. Better late than never, this scheme would be revolutionary in Indian context. Not only other states but other countries are willing to follow this idea thanks to Devendra Fadnavis.
Ae Dil Hai Mushkil cinema owners Devendra Fadnavis Fawad Khan Karan Johar Mahira Khan MNS patriotism Raj Thakerey ransom Satire