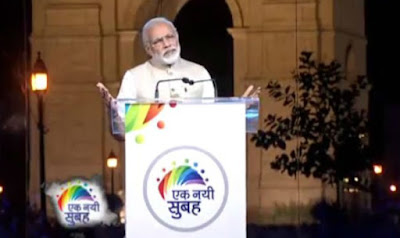 Time has changed, time is changing and time will change; things also change according to it but I prefer they change for the positiveness, for the good. Modi government's show on completing 2 years in power was loaded with Bollywood stars and cabinet ministers. ' Ek Naye Subah (A New Dawn) as it was called kept public broadcasting channel busy for the whole day in self praise of the government ,if you have done something you pat your back for it and wanted everybody to do the same but why at the cost of public money. My problem lies in the expenditure and the grandness of the whole event.

Firstly the day long telethon on DD channels devoid viewers from choice to watch any other thing on television. Secondly the front page ads on all national and regional daily newspapers would have cost government around millions, we the people have no access to the figures of that government expenditure. Lastly I believe that if you have done something for the people they will know it for the change in their living or working condition. In that case a mere one or two hour show on government achievements would be enough to tell the people about the source of change in their life. Such shows are acting like an expensive carpet which his hiding the tattered condition of the floor beneath it.

The drought condition in around sixteen states is not hidden from anybody, farmers are committing suicide on daily basis for unable to pay their debts, banks lending power have decreased due to increase in bad loan amounts, local businesses are on all time low, employment generation in last two years is zero, exports have reduced to negligible, in such a situation government is celebrating its achievements which some believe is to calm down unrest in people by showing little successes as huge achievements. Some experts also raises questions on what they called their successes like Jan Dhan Yojna which have more zero balance accounts than operating ones, Digital India which is only looks a dream when we can't even solve the call drop problem.

Similarly Make In India facing competition from China and there are little foreign companies interested in setting up factories in India after seeing the effect of Jat Agitation in Haryana. Skill India has failed because government is unable to generate employment for people they have trained, Start Up India has slow progress and companies like Ringing Bell which have not given a single phone yet at Rs 501 have yet to get common man's confidence. So my advice to Mr Modi is work for India and its people and then your work will speak for you without you taking pain to remind us what you have done in all these years. Till next post God Bless India.
2 Years of Modi Government Analysis common man DD channels Digital India Ek Nayi Subah Jan Dhan Yojna Narender Modi