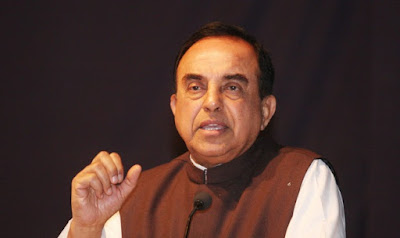 Subramanian Swamy is a unique character of Indian politics. He always grabs the limelight for accusing someone for something. From last two decades since I am observing the Indian politics, I saw him suddenly come up with issues creating a media hype by blaming people in power and then going back to oblivion. Since he is a lawyer at many occasions he has fought court battles also but except 2G scam he didn't delivered anything significant in any case.

Swamy is active in politics for more than 40 years but never hold any important government post except few months as minister in Janata Party government. He was the active member of Jan Sangh, Janata Party and now Bhartiya Janata Party but currently his role is limited to some vague statements and accusations with which his party detaches itself. Is this the frustration of not getting a portfolio even after so many years of active politics for BJP and RSS? Or he is under some secret mission to destroy the reputation of his own party's Finance Minister Mr Arun Jaitly? His latest target after Raghuram Rajan is Arvind Subramanian - Chief Economic Adviser to the government which directly comes under finance ministry. While Rajan was appointed by UPA-2, Arvind was chosen man of Narender Modi and Arun Jaitly, his attacks that Arvind is working for America are direct attacks on the government.

How can a government appoint an incompetent person to such a high post? How they not know if he is working against the government? Raghuram Rajan episode has earned criticism for the government from foreign media also and these allegations by Swamy against Arvind have irked many experts including Finance Minister Jaitly. Prime Minister Narender Modi and BJP President Amit Shah didn't respond to party member's useless talking which indicates their silent approval to such acts. Swamy's comment either sidelined by saying that they were his personal views or used to target opposition leaders whatever seems appropriate for the situation.

Most of Swamy's allegation were either baseless as against Jayalalitha, Raghuram Rajan or politically motivated as against Arvind Kejriwal, Sonia Gandhi, Rahul Gandhi because they are not proved yet in the public domain or against the court of law. He speak against someone at significant point either to threaten them or to divert their attentions. It is also possible for him to sue me if he read this article criticizing him for his hatred and vengeance politics.
2g scam Arun Jaitley Arvind Subramanian Finance Ministry Indian politics Janata Party Raghuram Rajan Subramaniam Swami