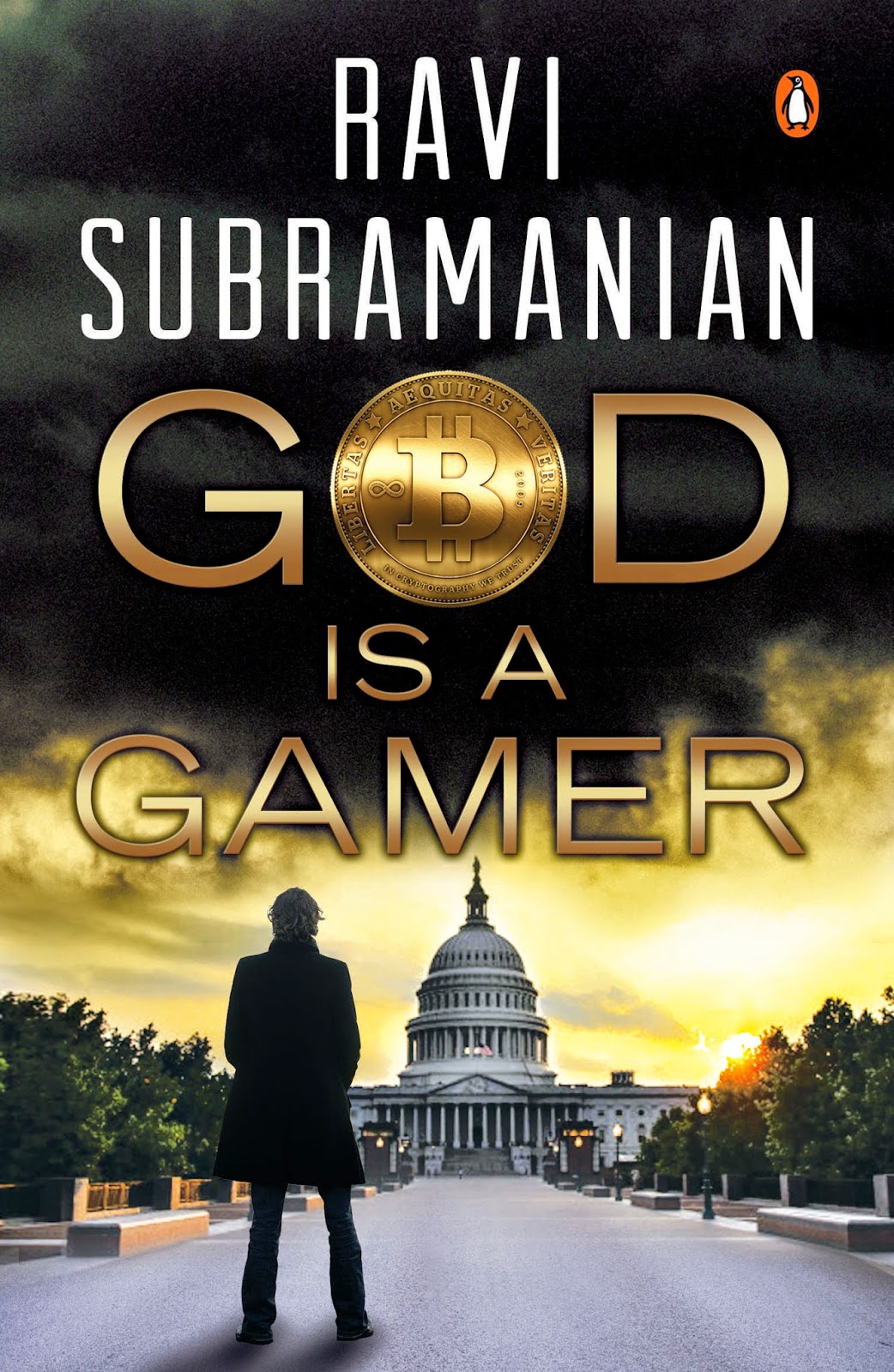 God Is A Gamer is written by Ravi Subramanian and is published by Penguin Books. I have received author signed copy of this book from BlogAdda as a part of book review program. Before going to the book I must admit that I haven't read previous fiction works of Ravi Subramanian namely If God Was A Banker, Devil In Pinstripes, The Incredible Banker, The Bankster and The Bankerupt and neither his non-fiction I Bought The Monk's Ferrari and after reading God Is A Gamer I regretted not being aware of his writing before. Ravi Subramanian is a banker by profession writing thrillers related to banks and bankers and this one is also one of them and promoted as world's first bitcoin related thriller. 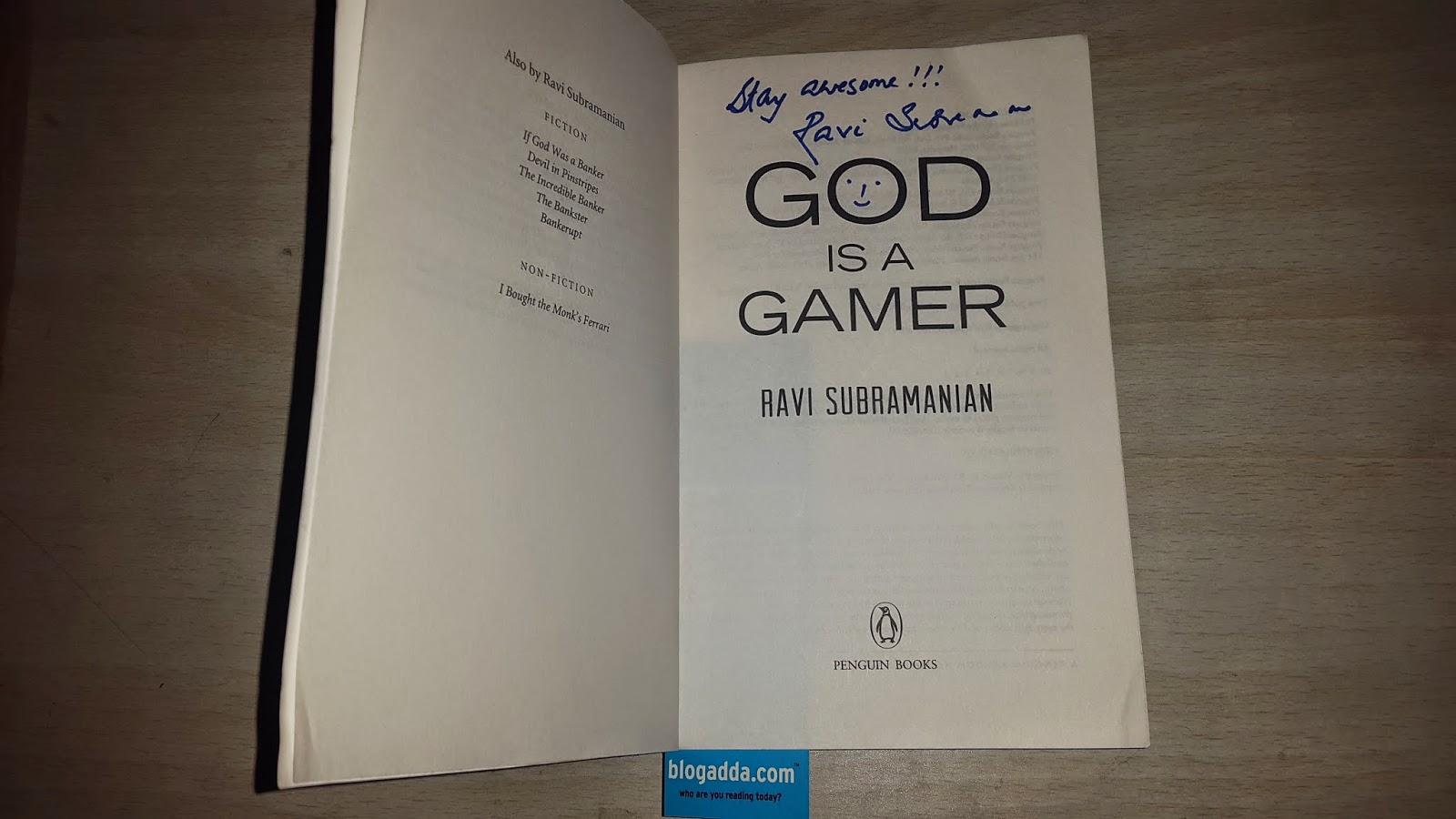 Cover : The bitcoin symbol in the title hints at its involvement in the plot. The shape of man looking at white house and the tag line ' Is Revenge A Crime?' relates story to the USA and to the white house. The shape of the man is looking confident enough to take his revenge but with whom is the matter of reading. The cover reveals that a narrative of intrigue is waiting for you which happens with the prologue in which so many things were happening but how and why is unknown.

Plot: Gillian Tan a senator and close pal to the president of United States was killed in a car explosion. This case was handed over to Adrian Scott a special agent of FBI on urgent basis. The story revolves around Scott's investigation of this case ,its link to the ATM heist of millions in New York city and with the new virtual currency Bitcoin. His findings about Indian involvement in the heist and Tan's assassination. How he finds its connection with Malvika's suicide a banker in India in his search? What's the role of leading gaming company of India in all these things? The fast paced roller coaster narrative cross gamer,banker,politician and terrorist shocking and surprising the reader at each turn. How Scott solve each puzzle to reach the real culprit is heart pounding. A case which moves from US to India and from India to US via many twists,turns and encounters with technicians, corrupt bankers,CBI, drug peddlers and many more.

Thriller : The tight plot keep you hooked and you try to go through the complete story as soon as possible to know who was pulling strings. The narrative is as quick as the story, the things were coming rapidly leaving you awestruck and surprised. The climax was superb and wasn't in haste. The end is like a some Hollywood thriller movie but is justified looking at the situations. I also liked the detailing of some technical and financial terms. Quick switching of scenes from different places to different people in the end makes you restless and more curious which I think is a right approach to such thrillers.

Spoiler : Complex plot and introducing a new character in every chapter in the start may look bit confusing to some readers. Use of some financial and technological terminology distance it from common readers who are not into thriller genre. Also I think the Bollywood connection is missing in the plot,when so much money,traps,betrayal are happening actors involvement is a must.

Rating : Must read for thriller lovers and a must try for everyone. I will give 3.9/5 to this book.