If movies wise the year saw flop from some big budget heroes we were able to witness some good music in songs of this year. Heeriye from Race 3, Husn Parcham from Zero, Suraiyya from Thugs of Hindustan are some of the good dance songs from films which didn't do good at box office. Here is the list prepared by me to celebrate songs of 2018: 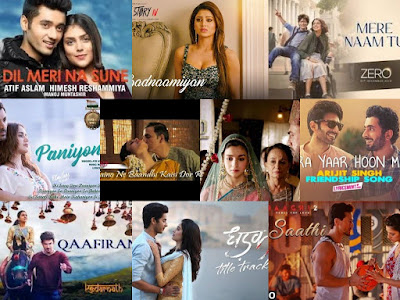 1. Dhadak (Dhadak): Ajay-Atul which were more to Marathi music than Hindi music whenever displays there talent here give their best. This song sung by Ajay and Shreya Ghoshal aptly expresses the emotions of young lovers. Music like the film is also inspired by original Sairat but works here as well.


2. Dilbaro (Raazi): Shankar,Ehsaan, Loy trio spread their magic once again by beautifully capturing essence of Kashmir in this song. Sung by Shankar Mahadevan, Harshdeep Kaur and Vibha Saraf the song absolutely deserves a place in this list. Lab Pe Aati Hai rendition by Sunidhi Chauhaan is also good. Gulzar's sahab's Lyrical magic is visible in all songs even Ae Watan is a beautiful patriotic song.


3. Dil Meri Na Sune (Genius): Manoj Muntasir has penned beautiful Lyrics for this Himesh Reshammiya number sung by Atif Aslam whose velvety voice suits such songs best.  The film didn't work out well but this song and another one sung by Arijit Singh 'Tera Fitoor are melodious.


5.O Saathi (Baaghi2): Another Atif Aslam sung song which made it to the list. Beautiful lyrics and Music by Arko gave a romantic touch to the action movie. I would also like to mention 'Lo Safar' from this movie which also liked by me.


6. Paniyon Sa (Satyamev Jayate): Composed by Rochak Kohli and penned by Kumaar this song is sung by Atif Aslam and Tulsi Kumar. The song gives romantic relief in this action packed drama. It is melodiously sung and composed.


7.Qaafirana (Kedarnath): Something romantic and that too in Arijit's voice you have to like it and that exactly happens with this song. You suddenly fall in love with this Arijit Singh and Nikhita Gandhi sung song composed by Amit Trivedi and lyrics written by Amithabh Bhattacharya.


8. Mere Naam Tu (Zero): Shahrukh Khan has many love songs featuring him but this one featuring him as a dwarf is special. Has beautiful lyrics of Irshaad Kamil and sung by Abhay Jodhpurkar. The song is composed by duo of Ajay-Atul.


9. Badnamiyan ( Hate Story 4): This movie has many beautiful songs like Boond Boond Mein, Tum Mere Ho, etc. This song is sung by Armaan Malik, penned by Rashmi Virag and composed by Baman-Chand. The hate saga take romantic turns with these songs.


10.Naino Ne Bandhi ( Gold): Akshay Kumar I think take interest in songs of his movies also that's why he delivers many good songs through his movies like this one sung by Yasser Desai which has music and lyrics by Arko.