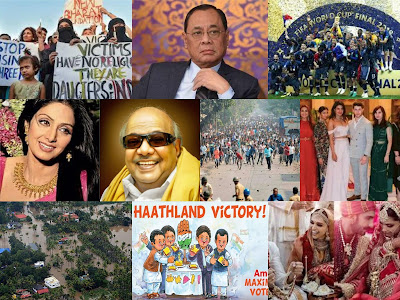 This year was not much good for me as I suffered a disease from which I am recovering and giving less time to writing but I thought to write a good bye post to bid adieu this year mixed with different feelings.

This year should be called as the year of marriages. We witnessed big fat weddings of Mukesh Ambani's daughter, Deepika Padukone-Ranvir Ranvir Singh, Priyanka Chopra-Nick Jonas, Sonam Kapoor-Anand Ahuja, than we have marriages of Kapil Sharma, Alka Yagnik's daughter, Kulbhushan Kharbanda's daughter, Saina Nehwal and many more other marriages. The year which started with Bheema Koregaon violence which become the epicenter for government and Dalits tussle increased when government made changes in Dalit atrocities bill.According to some experts this along with farmers distress made ruling party lose elections in Karnataka first and than in Madhya Pradesh, Rajasthan and Chatisgarh.

There remain tussle in Indian judiciary and government also which subsided slowly and give way for new chief justice of the country Justice Ranjan Gogoi. Government criticism remain the highlight of most of the year as there role in not supporting removal of article 377 was not liked by LGBTQ community, Rafale scam, ruling party support to Kathua Rape accused, rigidity in making Aadhar mandatory, government's silent approval to mob lynching, Love Jihad killing, communal hatred were evident when some ministers seen supporting these ideologies. In the later part of the year the controversy over RBI Governor Urijit Patel's resignation also sparked controversy.

Hoping that 2019 eases difficulties faced in 2018 I wish Happy New Year to my readers.