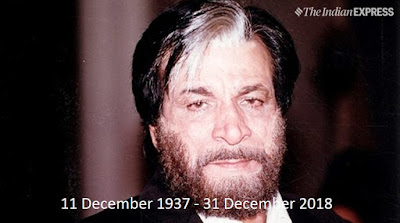 I was late in writing this post but I am not comfortable with the fact I didn’t give tribute to this man whom I admired very much during nineties and the admiration increased as I knew about his writing skills as script writer and dialogue writer for many hit Hindi films. He died on 31st December 2018 giving sadness to his love one’s in the end of the year.

Kader Khan was born in Kabul, Afghanistan in 1937 but got his education in Mumbai where he also became a teacher. His acting was noted by yesteryear’s character actor Agha who recommended him to Dilip Kumar sahib who offered him two films which started his film career. His first film was Daag with Rajesh Khanna and then he did many films with him. I recognized from his films in the nineties where he was mostly doing comedy with Govinda. On watching more of his movies I realized how versatile actor he was with films like Jaisi Karni Waisi Bharni, Dariya Dil, Ghar Ho To Aisa, Hum Hain Kamal Ke , Baap Numbari Beta Dus Numbari, etc in which he was almost the lead actor of the film.

In films like Desh Premi, Suhaag, Parvarish, Amar Akbar Anthony, he played a villain. Khoon Bhari Maang, Kishen Kanahiyya, Coolie No. 1, Hero No. 1, Sajan Chale Sasural, Judai, Koyla, Himmatwala, Ghar Parivar, Bol Radha Bol, Raja Babu, Sooryavansham, Aankhen, Muqaddar Ka Sikandar, Bade Miyan Chote Miyan and the list is endless which determines how great actor he was. Some movies look incomplete if we imagine them without him. He also appeared on television shows but it didn’t work well. He was script and dialogue writer for many south films also. Sharabi, Muqaddar Ka Sikandar and many Amitabh Bachchan films were written by him.

He spend his last few years after falling ill outside India in Canada where his children are settled and sadly no one from the film industry with whom he worked never cared for him. Neither news channels nor gossip magazines give any news about his whereabouts in these days. Only we heard some rumors on social media time to time which used to worry his well wishers.

He will remain alive with his films in our memories forever. Whenever we will thing about family loved humor we will always think about him. RIP Sir Kader Khan.