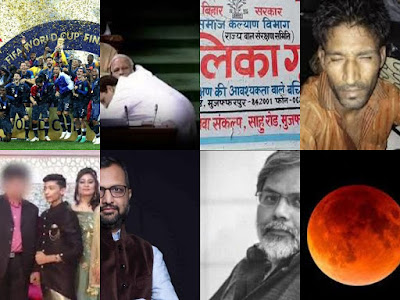 From historical Rahul Gandhi hug to PM Narendra Modi in Parliament and the wink that follows this hug to Imran Khan winning elections in Pakistan to mysterious suicide of a family in Burari area of Delhi to NRC controversy in Assam to Kiki Challenge to debate on entry of women in Sabarimal Temple complex to Rafale Scam and involvement of Reliance Defense in it to Dhadak release and its comparison to Marathi original ‘Sairat’ to lynching of Rakbar Khan in Alwar which put role of police under scanner to the longest Lunar eclipse to RS Sharma’s show your Aadhaar challenge which left him exposed before the country to France football world cup win and many other incidents made news this July .

There are so many news to show but our propaganda driven channels concentrated their debate to Hindu-Muslim issues to widen the divide in the society. Most don’t even care to show rapes in Muzaffarpur, Bihar shelter home because BJP is in alliance with Nitish Kumar there.  Let’s have a close look on this news.

There at least 34 girls were sexually exploited for years in a shelter home meant to take care of them. The shelter home was partially funded by government for care and maintenance of these abandoned or ran away girls. A local news channel ‘Kashish TV’ brought this issue in front of the nation. Many government employees and ministers are reportedly involved in the crime. The strange thing is that government gave it grant even after reports of irregularities in the functioning of shelter home. The girls are scared and not in a position to face even each other and their counselling only can bring them to normalcy. The youngest victim is only 7 years old.
The Supreme Court has taken the matter in its own hands and directing the police to take appropriate action. It has also asked Nitish Kumar government for explanation on the issue. The incident is not only shocking but shameful for the society which can’t even care for those left by their families or living their due to tough circumstances. I hope police soon take action against those involved in the crime.

The August started with news of curb in freedom of expressions as well as on free and fair journalism with government’s involvement in forcing ABP News’s Abhisaar to 15 day holiday and  resigning of its editorial head Milind Khendekar and anchor Punya Prasoon Bajpai.  Bajpai was earlier removed from AajTak also over tough questions asked to Baba turned businessman Ramdev. No one knows what will happen to them but we must speak on such developments so that someone left to voice our concern when they attack us.
Aadhaar challenge ABP News Burari suicide Kiki Challenge Muzaffarpur Punya Prasoon Bajpai Rahul Hug Modi Rakbar Lynching Round Up shelter home