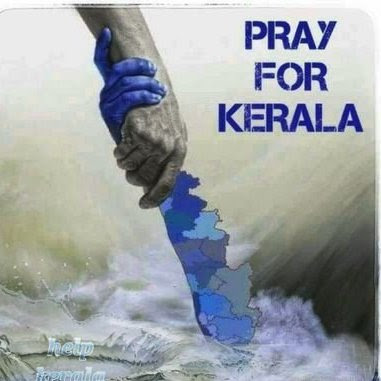 Kerala's most worst flood in 100 years has killed more than 324 people and more than 2 lakh people are living in 1500+ relief camp. It's a natural tragedy and we can only pray for their safeguard. Army, Navy, Coast Guard and NDRF (National Disaster Relief Force) working tirelessly to rescue as many people as possible. The opening of all the gates of almost all the dams in the region has send more water to the flood affected area making relief work more difficult. In some areas water is also entering relief camps.

Prime Minister Narendra Modi also surveyed the affected area and released some initial rescue fund to the state. Keralites living in UAE, UK, Australia are all desperate in concern over rescue of their families stranded in floods. Kerala is being ravaged by torrential rains since August 8, which have triggered landslides and floods. It  has disrupted air, rail and road traffic in several places. Public transport has practically disappeared from most parts of the state.

National news channels and newspaper remain ignorant to the condition of Kerala till PM Modi didn't decided to visit Kerala. They remain engaged in covering Independence Day celebration and telecast live funeral of former Prime Minister Atal Bihari Vajpayee when a part of the country is almost submerging in water. The apathy shown to a region of south is really disheartening. At this time we can help by donating to Chief Minister Distress Relief Fund as much as possible to Stand with Kerala at this time.

We can not do anything sitting at such a long distance but we can #PrayForKerala because prayers can travel miles in second. Hope Kerala stand back to its feet soon and the rain Gods give them some respite from the rain.
Chief Minister Distress Relief Fund current affairs dam flood gates Kerala Floods national disaster Pray For Kerala torrential rain