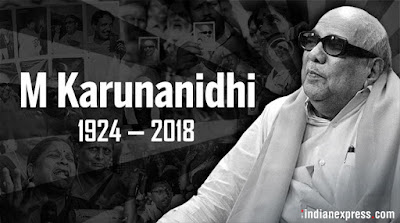 Kalaignar literally translates into ‘scholar of arts’ or just artist the title earned by M Karunanidhi from his followers not for being a Tamil film actor but due to active role played in Tamil Nadu politics. M Karunanidhi breathed his last on 7th August 2018 at the age of 94 in Chennai after prolonged age related illness. He married thrice in his life and has four sons and two daughters from different wives among them M.K Stalin second son of his second wife is seen as his political successor.

Karunanidhi entered Tamil Nadu politics at an early age from anti-Hindi agitation and become part of Dravidian movement by joining DMK. Dravidian movement is associated with atheism and anti-Brahmin ideology the reason he was disliked by fundamentalist Hindus. He was a screenwriter in Tamil movies through which he extensively shared ideas of atheism and anti-Brahminism to masses. His screenplays consists of themes of anti-Brahminis, widow remarriage, abolition of untouchability, self-respect marriages, abolition of zamindari and abolition of religious hypocrisy. He rose to the rank of President of DMK and served as Chief Minister of Tamil Nadu for five terms and twenty years between 1969 and 2011. It is a almost a miracle for me that an atheist ruled those people who are strong believers of scriptures and religion. He must have served them well.

In nineties I remembered to heard only two names of Tamil politics on national level i.e J Jayalalitha and M Karunanidhi. This shows how they rose to importance in national politics also. M Karunanidhi’s death put an end to an era of stalwarts of Tamil politics; the man who made anti- Hindi and atheism as his tool remain true to these ideologies till his end. He remained in controversy on the issues of corruption by his family members, for his statement on Setusamundaram and existence of Lord Ram. He was accused of connections with LTTE an organisation responsible for death of Prime Minister Rajiv Gandhi and also of charges of nepotism.

As an observer of politics I can claim that a big void has been created in Tamil Nadu politics which is impossible to be filled by any other leader. No one can earn the support of masses like he does in his lifetime. With him the country has lost the true champion of social causes. RIP M Karunanidhi.
Chennai Chief Minister DMK Dravidian Kalaignar LTTE M Karunanidhi RIP Setusamundram Tamil Nadu Tribute