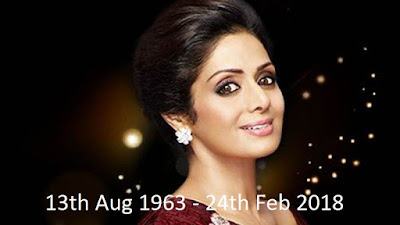 I am in a deep shock after hearing Sridevi’s untimely death news. It’s a sad moment, the one you wish to believe is not true and that’s what I did when first heard the news of her death. I checked with the news portals to confirm the news and then I realize we have lost a legend. I usually write tribute for celebrities who passed away but I am finding it difficult to write about the one who was among my childhood favorites as I am disheartened with the loss. We who spend our childhood in 90’s know about the craze for her in those days and how much we loved her. She is among the most popular female actor of that era the one who is regarded as first female superstar of Hindi film industry.

She was just 54 when she died of accidental drowning (26.2.18) in Dubai where she was present for a marriage function. She started working at the age of 13 from south film industry and made her Bollywood debut in 1979 with Solva Sawan but it was Jitender starer Himmatwala which made her a Bollywood sensation. It also established her as a ‘Dance Queen’ with song ‘Nainon Mein Sapna’. Later songs like ‘Mein Teri Dushman’, ‘Mere Hathon Mein Nau-Nau Chudiyan Hain’, ‘Kaate Nahin Katte Ye Din Ye Raat,’ ‘Hawa-Hawai’,’Kisi Ke Haath Na Aayegi Ye Ladki’,'Mhare Hibde Be Reh Gayee Re' and many others become favorite among dance loving people.

She proved her acting skills in films like Sadma where she played a child-woman suffering from amnesia, Lamhe, Chandni, Chaalbaaz which has her double role, Mr India in which her ‘Charlie Chaplin’ act is still the best comic act by a female actor. Judai, Laadla,Tohfa,Justice Chaudhary and recent releases English Vinglish and Mom are all her memorable performances. She even acted in a serial on Television. Nowadays she was busy in preparation of her daughter’s launch in film industry.

She acted with every famous superstar actor of her era like Anil Kapoor whose brother Boney Kapoor a film producer she married, Jitender, Dharmender, Amitabh Bachchan, Salman Khan and also a film with Shah Rukh Khan. She was a great actor and a loving human being who many time with her roles inspired us. She made us laugh, cry, emotional and attached to her roles. I will never forget her neither the film industry going to forget her valuable contribution to it. Rest In Peace Sridevi.