Delhi is mini India in itself having experienced thousands years of history it stores marks of multiple culture and dynasty. You need about a month to explore Delhi completely. This was my fourth trip to Delhi Darshan (Delhi Sight-seeing) in first leg I visited Rajghat and other leaders' memorial, India Gate, Lotus Temple and Qutub Minar. Then I have a wonderful experience of visiting Rashtrapati Bhavan in December last year. The third leg happened on Eid holiday this year when I visited Humayun's Tomb, Purana Qila (Old Fort), Red Fort and Jama Masjid. This time on Diwali Holiday I decided to explore less famous places of Delhi in Mehrauli area.

Today's Mehrauli which is in its South West part is ruled by many dynasties including Slave and Khilji dynasties and houses many monuments of that era. It was like discovery of that part of Delhi for us because three of us who visited there were new to the area having visited only Qutub Minar there. Somehow with names of some places searched in Google we first reached Hauz Khas Fort in Hazu Khas Village. 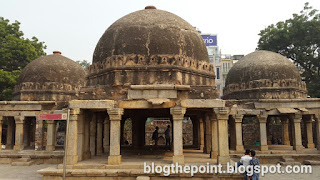 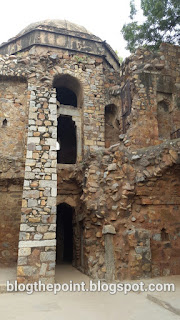 The old rock monument is near the deer park. Its entry is free and thus is a famous place for love birds. Almost under every arc window facing the deer park a couple was sitting and in the insides where some rooms are made they are getting little cozy. I will not recommend this place for family outings. The area around this place is so much encroached that it becomes difficult to spot it which should be taken care to attract more tourists.

We were clueless about where to go next when we come out of it because the places we searched on Google were not known to locals there. We saw a sign board of Rose Garden and walked to that direction. It was a garden without any roses but only couples of different age groups sitting under trees or on benches or on ground. Frustrated for not finding the desired places we decided to visit Qutub Minar to spend rest of our time. Qutub Minar was crowded and it was difficult to get tickets easily. We were hungry so we ate something and then started walking around that area. It was then I noticed a domed structure. We decided to discover that place. 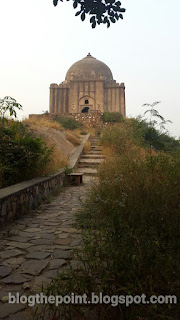 It was Aazim Khan's tomb of seventeenth century build on top of a hill. It was neglected by the authorities and the people. No proper place to enter, staircase was broken and even the wild plants growing around was not trimmed properly. The view of the city from that height is beautiful. If governments maintain it properly then it could become a famous tourist spot. Adjacent to it was Ahimsa Sthal. 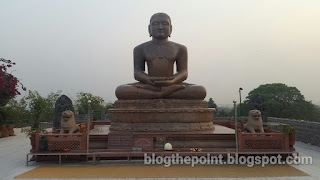 Ahimsa Sthal is a Jain temple having big sculpture of Bhagwan Mahavir situated on a similar kind of hill as Aazim Khan's tomb. It is peaceful and beautifully maintained by the staff and administrators of Ahimsa Sthal. 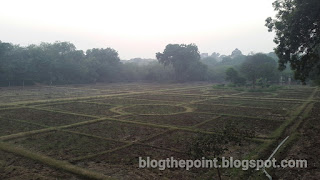 When we came out of Ahimsa Sthal, again we have no idea where to go. It was already 5 pm so we decided to go back home. It was then we found the dirty pillar stone with Mehrauli Archaeological Park written over it. I asked a flower seller for its direction and we went to that place. Actually the places we were searching from morning like Jamali-Kamali Masjid and tomb, Jahaz Mahal, Rajaon Ki Baoli, Quli Khan Tomb, etc were situated inside that park along with many more structures some of which are ruined with time. 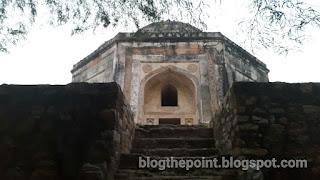 Before sunset we saw only Jamali Kamali Masjid and Tomb which was closed for the visitors at that time and Quli Khan Tomb. There were no lights in that park which forced us to move outside. We saw some pre-wedding photo shoots happening there I think because its entry is free and you required no permission to do so. The Qutub Minar in the back ground makes it a wonderful destination.

Overall it was a nice experience and it felt that we have discovered Delhi again that day. These places should also be promoted by the Tourism Ministry and not just Qutub Minar, Humanyun's Tomb, Red Fort, Rajghat, etc. And before promoting these places government must ensure proper lighting and cleanliness of these monuments. Appoint care takers and other supporting staff in places like Aazim Khan Tomb and Mehrauli Archaeological Park.