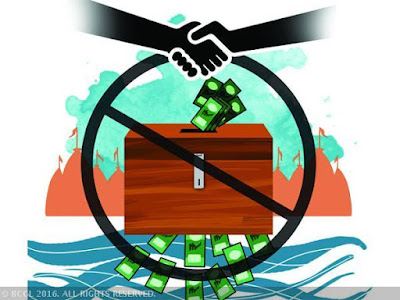 Modi government believes in ‘Sabka Saath, Sabka Vikas’ since it has come in power ☺. Moving ahead on this mission the government has introduced amendment to the Income Tax Act in Lok Sabha on Monday for our dear black money hoarders who are experiencing sleepless nights after demonetization. Black Marketers who were facing difficulties in finding the way to convert their black money in legal money can now do this with government's help. Earlier they were either depositing this money in accounts of poor people with recovery period after March 2017 or were exchanging from some mediators or bank officials at the commission of up to 60% which means they are getting only 40% of their hard earned black money ☹.

Modi ji is known for his deep thinking before any of his quick actions. This idea also proving the same where the government is offering only 50% tax on converting black money into white and no punishment.Not only that 25% of that converted amount can be withdrawn at once and the rest 25% will be used for welfare of the poor. Government has promised that this welfare scheme for black money hoarders will also ensure confidentiality so that their names remain secret and they remain nationalist in eyes of the people. Those who feared for arrest or scrutiny for their black money are now feeling proud of being part of the development work of the government.

Sources among the black money hoarders said that this will boost their morale to accumulate more black money by tax evasion in the future endeavors which will further come handy for Modi ji in using it for the welfare of the people. Income Tax officers are also happy because they are hoping to get some incentives from black money hoarders while examining their balance sheets. The people standing in bank queues are yet to hear that news for busyness in depositing and withdrawing money. Source close to the government are sure for the success of this scheme after seeing the enthusiasm of their ardent followers on social media sites. Now people with ‘Illegal Properties’ are hoping for some similar measures so that they could contribute to the nation building.

For more information on this government approved money laundering you can download Namo App or visit government or Income tax website. The anti-nationals and traitors who were opposing Demonetization without seeing that it has halted the fast paced lives of people so that they can think about themselves while standing in bank queues or arrange their marriages through Facebook live are now criticizing this welfare of poor dear black money hoarders. These Modi haters will go to hell.
amendment bank queues black money Black Money Declaration Scheme demonetization Income Tax Act Money laundering Narender Modi Satire