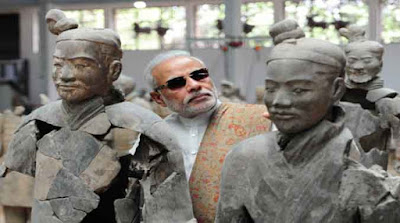 What a common citizen like me has an opinion on national issues of importance doesn’t matter neither it heal or agitate those affected but what the Prime Minister says hold ground and is important for each citizen of the country. A leader for me is not one who can lead us to victory but a person who instill belief in his team that we can win. Sadly our Prime Minister Mr Narender Damodardas Modi has failed in earning that confidence of a large population.

Whether it is issue of farmers killing them in drought, anti-national debate, JNU row, Rohith Vemula suicide, Beef ban, FTII students’ protest, Love Jihad, Akhlaq lynching and most recently attacks of cow vigilantes on Dalits/Muslims and Kashmir unrest, he always reacted late or never reacted at all in an uncaring attitude. His silence many times comes out as his approval to such issues.  I agree that media and we the people of India are scrutinizing him more for his actions but he himself is responsible for it by generating high expectations during his campaigning before 2014 elections. All his promises like 1 crore employment in a year, control in terrorist activities, better relation with the neighbors and more importantly development which he marked his main goal are not achieved. In addition to the burden of fragile economy the disturbance through his party’s affiliated people/organizations and his silence have increased the unrest in people.

He reacted on Dalit flogging in Una Gujarat and on Kashmir unrest now when the situation is out of control. He must come out from the campaigning mode to understand the happenings of the country better which has varied problems unlike Gujarat which he ruled or 12 years. Even when he spoke about attacks of so called gau rakshak dals on Dalits he didn’t spoke about attacks on Muslims which are bigger target of these groups.  His reactions this time also were dramatic and appeared insensitive. The cows for which some are killing humans are also dying in government cow shelters (Gau Shalas) in BJP ruled states which clearly exposes their hypocritical attitude.

Kashmir unrest is responded by army with violence when a sympathetic hug and unconditional dialogue with the people of Kashmir is required which have lost more than 60 young lives in army retaliation. Sometimes when I think about indifference of Mr Narender Modi on various important issues I fear that he has still left with about three years and things can go worse from bad. The programs he has initiated in these two years are also mere events without any fruitful result for people or the economy. Even if he does nothing for these issues he must speak timely or just tweet his opinion which he do for every small things. Hope the atmosphere of animosity soon ended and give way to love, peace and brotherhood. Good Bye. God Bless India.