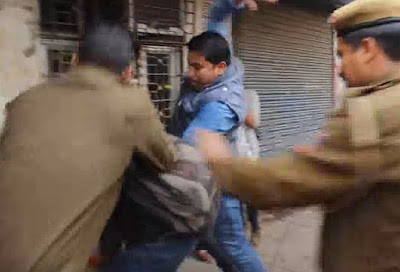 "What do you expect from Delhi police that they will worship them?" It was the answer when I discussed the students' lathi charge incident with someone. "Jiski Lathi Usi Ki Bhains", he added which translates as power lies with one with the stick. This is the image of Delhi police and Modi government in people's view. It's not that I think Delhi police officers as saint but regularly watching Crime Patrol on Sony TV made me think differently.

Delhi police lathi charged students of Jawahar Lal Nehru University and other student unions during their protest in front of RSS headquarters in Jhandewalan, Delhi over suicide of Hyderabad student Rohith Vemula. What is more shocking was that some other people who were not from students' union and Delhi police were beating these protesters. The beating was same for both girls and boys and in video you can hear voices from students asking what was the reason of such police atrocities. It is not a rocket science to guess that civilians who were brutally beating students along with police were RSS workers. Is RSS above law and democratic values of protest?

Prime Minister Narender Modi who when on tours abroad boost about youth power of India and the potential lies in the youth of the country must bring out his Mann Ki Baat to his lips about this police atrocity. This is not the way to treat protesters. Are they trying to imply through such violence that nobody dare to protest against this supreme unconstitutional authority? Are we still under British rule? Here I will not blame only Delhi police and Narender Modi government because in every state of India student protesters receives such kind of police treatment. The political parties which crave for votes from them don't bother to listen to their needs and demands.

I demand strong actions against all those police officers who were responsible for this incident and I also wants to know who ordered them to do so. Was Home Ministry aware of this lathi charge orders? It is sad the police system is corrupt and thrives on sycophancy. If you don't appease your masters you were not going to get promotion or some creamy post after retirement and the common man bears the burden of this police behaviors. Below is the video of policewale gunde beating the students.