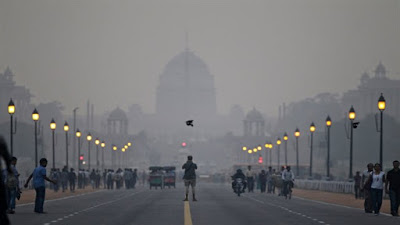 National Capital, crime capital and now pollution capital, Delhi is gaining popularity in all negative things thanks to negligent approach of government authorities and callousness of Delhihites for necessary issues. This statement came from the bench of justices Badar Durrez Ahmed and Sanjeev Sachdeva while reading the action plans filed by the environment ministry and Delhi government on dealing with pollution of Delhi. They said that action plan is not comprehensive as they did not contain specific responsibilities of each authority and the timeline for carrying them out.

Delhi registered almost 1400 vehicles daily which add to the already severe pollution level. The pollution by dust particles comes second after vehicular pollution in making Delhi's air unfit for breathing. Apart from this pollution created by burning of dry leaves by Delhihites, burning of coal in thermal power stations and construction site's dust emission have turned Delhi into a Gas Chamber. According to health surveys in last ten years lung capacity of newborns have decreased in Delhi, respiratory problems have increased up to 65% and now there are more cases of lung cancer as compare to the cases registered 10 years ago.

Rapid urbanization and metro construction have removed large areas of green cover which have never replaced and cared by any agency. Although CNG is used in state Autos and Buses cars are increasing because public transport vehicles not sufficient to cater ever increasing population of Delhi. After high court orders Delhi government have planned to introduce Odd-Even scheme for private vehicles which allows odd and even number cars on alternate days. This plan will reduce vehicles on road by half but with lack of public transport system to incorporate all those who leave their cars there is little hope for success of this plan. The other move of closing down two thermal plants which are not running with their peak capacities will hardly change air quality. Government's have taken steps in haste without proper consultation from experts.

Some immediate and long term measures are required to control pollution:

Rich can afford air purifiers but poor don't have that luxury. They face smog directly. Children, elderly and sick people are more prone to ill effects of pollution, they must avoid outing at peak pollution hours of morning and evening. Government alone can't fight this evil, it needs our support to curb pollution. We should work hard to make Delhi air save and fresh for us as well as for coming generations.
CNG Delhi Air Pollution Delhi High Court Delhihites Fresh Views lung cancer Odd-Even Logic respiratory problems