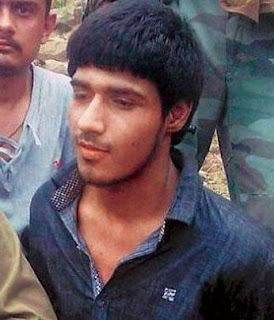 Indian Army catching an alive terrorist isn't a new thing. They have caught 44 Pakistani terrorist last year which are in their custody and under interrogation. But why is arresting a young terrorist between 16 to 20 years of age in Udhampur (J & K) became a matter of spectacle for our news channels? In a race to show themselves as fast they made the mockery of such an important issue. Have you heard or sea Americans coming out of their sleeves for killing of Osama -bin- Laden? No they don't because this hampers your image as a serious fighter to terrorism.

Some cabinet ministers also tweeted it as the second terrorist caught alive after Ajmal Kasab during 26/11 Mumbai terror attacks giving wrong signals in the public domain. The trolls on twitter got an opportunity to target every Muslim of the nation for this arrest. A conspiracy to polarize the masses through this incident appears eminent. The hate mongers must understand that those Muslims who denied Mohammad Ali Jinnah's Two Nation Theory by deciding to reside in India have nothing to do with Pakistan.

Experts condemned the television debates which tried to arouse people's sentiment through their loud coverage of the incident. They said that India should take this as an opportunity to pressurize Pakistan to admit the use of their land in promoting terrorist activities against India. The more evidence of Pakistan sponsored terrorism would bring down their credibility in international arena. The small arrest of a terrorist by villagers required an applaud for those brave hearts and not encouragement of mislead youths by showing his fearless visuals 24 hours on TV screens.

The present government's different statements at different level shows their confused state in dealing with Pakistan issue. Sometimes they exchange gifts with them, sometimes sings phrases of '56 inch chest' and advocates military action on Pakistan's soil, sometimes push for talks, sometimes says no talks without confirmation on terrorists and so on. This attitude has also lead to reemergence of separatist forces in Kashmir with higher intensity and increase influence of ISIS among Kashmiri militant groups. There is a need in government to rethink about their Pakistan policy.
56" Chest Ajmal Kasab hate mongers ISIS Muhammad Ali Jinnah Muslims Osama-bin-Laden Pakistan terrorists TV debates Twitter trolls Two Nation Theory Udhampur