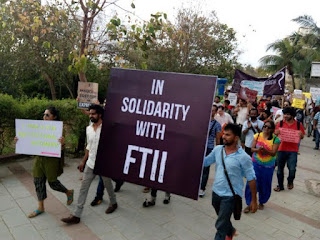 Pune police arrested 5 students of Film and Television Institute of India (FTII) at midnight of 18-19th August after FTII director Prashant Pathrabe lodged a complaint against them for detaining him in campus on Monday. The action taken by police is result of a long ongoing battle between the Modi government and the students' union for some faculty members appointment.

This is second such undemocratic action by Modi regime after their attack on retired army men through Delhi Police at Jantar Mantar area of the capital where they were sitting on the demand of One Rank One Pension ( OROP). Recently government also issued order against four news channels for their coverage of Yakub Memon's death sentence. Media, Retired Army Men and now students. Is the government trying to curb the voices against its policies? Is this an indication of failure of Modi Sarkaar?

The move of saffronization of education by government was condemned by several educationist for lowering the standards of learning in India. In this way government is also playing with the future of the country by demeaning world reputed IITs and IIM's. This police action in Pune has a bigger meaning because such actions were previously seen by dictatorial governments in China, Russia Myanmar and India during emergency. The blindfolded followers abusing who ever talk against government are danger to the country as they try to curb the voices which points at mistakes.

India have suffered at the hands of the politicians at every occasion but the people have emerged victorious each time. It is the people of the country who are responsible for the development in hate-free growth favored environment provided by the governments. I stand with all those students who were arrested and who are protesting for their rights and hope the government will take a suitable step to resolve this issue and give these storytellers a free space to unleash their creativity.
Film and Television Institute of India FTII Gajender Chauhan Indian Army Mahabharata Modi Sarkar One Rank One Pension(OROP) police action Pune Police RSS students Yudhishter