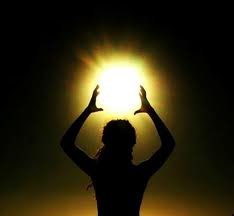 Asaram Bapu is a spiritual leader lives in Ahmedabad of Gujrat State in India. He has many followers,his teachings are valuable to them,they believe in him to the extent that they consider him as equivalent to God. He has lavish ashram's in all over the country for his spiritual teachings and where he give shelter to many homeless and needy people. There are around 350 ashrams where everybody is welcome without any discrimination of race,religion and financial status according to his website. These things really present him in heavenly lights.

But there is another side of him which I would like to mention. He had to him attached so many controversies like land encroachments in Navsari district,in Madhya Pradesh,charges of attempted murder,deaths of children in his ashram,etc. These charges often termed as allegations put on him by his enemies,what is truth behind them is still under probe and it will be unfair to judge him with these charges. But what he said about Delhi Gang rape victim and then what happened during his holi celebrations recently are enough to understand his spirituality. He wasted thousands of litres of water in states where people are facing droughts,he spoke indecently about Delhi Gang rape victim and he never apologized for his actions.

A spiritual leader should think twice before speaking as his teachings influences others, one who believes that a rape victim is equally responsible for what happened to her will only teach disrespect to women among his followers. I don't know why people are so crazy about spiritual gurus,babas and other such godly people in our country, it has become a big business, babas are used politically to influence voters,they are a way to turn black money into white. Every second day there is a news about a fraud baba but still we are crazy about them. Next time if you wants a way to God search inside yourself before going to any guru or baba and the money you wants to give to them use to feed someone hungry.
Ahmedabad Gujrat Asaram Bapu ashram drought God holi News spirituality