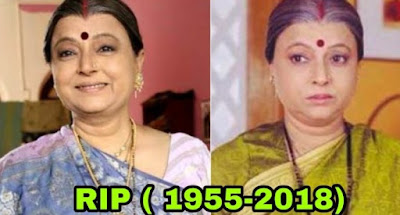 Neither Rita Bhaduri is an household name nor I am a big fan of her but I still have some memories attached to her which I want to share after her death today in a Mumbai hospital. She was a character artist or a supporting actor in 70's , 80's and 90's and I am sure you also didn't know about any path breaking role of her which have impressed the audience. Yet she was an important personality of TV and film industry and her presence on screen used to feel by the audience.

She reminded me of a weird unique show of 90's which aired on Zee TV. The show's name was 'Grihalakshmi Ka Jinn' where she played the protagonist 'Girahalakshmi' whom God send a Jihn to solve her day to day problems, the Jihn was played by 'Raj Zutshi'. It was a comedy serial and had a unique story line which if I think today can be compared to 'Nobita and Doraemon' relation. In this show too Raj Zutshi (Jihn) was like her brother. All other her roles were mostly of mother, grandmother, nani, bua , etc and I only had glimpses of her roles in my mind as that in Anil Kapoor's 'Ghar Ho To Aisa', Govinda's 'Hero No.1', Shah Rukh Khan's 'Kabhi Haan Kabhi Naa' Priety Zinta's 'Kya Kehna' etc.

In television industry she was mostly associated with women oriented 'Saas-Bahu' kind of serials where she played mother,dadi, nani or other such kind of roles which I don't see much and I don't have memories of them but yes I know she was active recently also. Anyways she was a face one recognizes and her loss will be felt among people who are regular in watching her serials. She died today(17th July 2018) of kidney ailments in Mumbai. May her soul Rest In Peace. 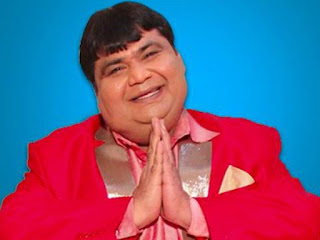 Recently Kavi Kumar Azad who used to play an important character Dr Hansraj Hathi in famous  comedy serial of SAB TV 'Taarak Mehta ka Ultaa Chashma' has passed away due to heart attack. His jovial nature was evident from his appearance on screen. He has the smiling,tension free appearance on show which brings smile to our faces. I know he will soon be replaced by some other actor on the show but his absence will be missed immensely.
Dr Hansraj Hathi films Grihalakshmi Ka Jinn Kavi Kumar Azaad Rita Bhaduri Taarak Mehta Ka Ultaa Chashma Tribute TV