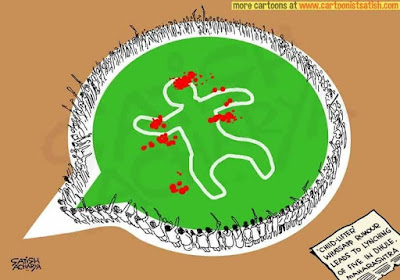 A new trend of mob lynching has emerged in many Indian states mostly ruled by Bhartiya Janata Party shaping Narendra Modi’s ‘New India’. The idea of India is idea of togetherness, inclusiveness and acceptance but the new India works contrary. In this segregation, hate and intolerance hold the importance. Till now mobs were killing people in the name of cow in various places like in Uttar Pradesh, Jharkhand and Rajasthan, some trends of hate crimes also noticed when Muslims, Dalits, Tribals,North East Indians were attacked by group of people. Now the poor and down trodden are attacked by labeling them child lifters.

The dangerous trend is that the online mobs (trolls) have come out in open by instigating people through fake WhatsApp messages to kill innocent people. Even government appointed officer Sukanta Chakraborty was also killed by a mob in the state of Tripura when he was appointed to visit villages and tell people about the fake news. Recently five people were also killed by a mob in Maharashtra on Sunday after rumors spread on social media that they were child traffickers. More than a dozen people have been killed across India since May in violence fueled mainly by messages on the WhatsApp service.

What startled you is that the messages spreading on WhatsApp are almost similar about child trafficking but translated into the local languages of the area where they are circulated. This shows preplanning of such incidents. Sadly all governments are unable to do anything about these incidents. The anger and hate generated through fake social media groups and messages is coming out in the  way of police action as it is difficult to find out the source of the message. People forward fake messages without checking their authenticity and believe that they are true. No one wants that anger filled ‘New India’. How you can call companies in such environment to ‘Make in India’? Is ‘Skill India’ imparting knowledge to gather mobs to kill people? All government schemes will fail if violence will extend to such levels.

The Supreme Court (SC) said in its judgment that mob lynching is a crime no matter what the motive is and added that it is a law and order issue that is the responsibility of state governments. Notably all states which reported such incidents are ruled by BJP and Mr Modi as usual is silent on such an important issue. I request PM Narendra Modi to select issue of ‘Mob Violence’ in this month’s ‘Mann Ki Baat’. He should speak against these crimes in a strong manner to be understood by people. ‘Mob violence’ is nothing but troll culture (which didn’t even spare External Affair Minister Sushma Swaraj ) on streets. PM should start un-following unruly trolls to give a strong message to the nation.

We all should stand and say in one voice that we don’t want such hate filled ‘ New India.