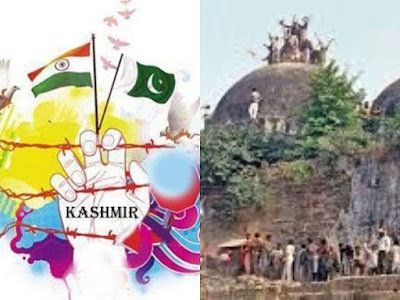 From last 30 years two issues are making headlines in Indian media: Kashmir problem and Ayodhya Ram Mandir. India is dealing with both the issues almost from independence and even before that because Babri Masjid issue was also in the list of concern of British India and ownership of Kashmir was always discussed with the last ruler of state Raja Hari Singh. Let’s not go much in the core and history of both the issues but one thing we can conclude from the developments of last 30 years is that both the issues are making mockery of Indian democracy arriving in the limelight on every onset of General elections or elections in the Hindi speaking belt.

There are issues through which political parties played through the emotions of people mostly in the northern India and these two are the leaders of most famous propaganda technique. Observe closely and you will find that people who are speaking of article 370, Kashmir constitution and relation of army with Kashmiris are not aware of the ground reality there; they are not even close to the people living there. One thing which can I deduce is that government of India, government of Pakistan and the separatist no one has an authentic solution of the situation but when things were at peace people are willing to discuss out the solution or the midway of all these problems. Biggest problem is that Indian government is not willing to accept Kashmir as disputed territory in spite of the fact it was not ruled by Indian constitution and the huge army is deployed there to maintain peace.

The recent development of breaking away of PDP-BJP coalition also points in the direction that right now no set Kashmir policy is available with present government and more use of muscle power only taking away India from people’s heart. Now come to the Ram Mandir issue. India witnessed biggest slur on democracy in independent India with the demolition of Babri Masjid. Age long continuations of harmony broke at that point and make a permanent crack in Hindu-Muslim unity giving way to altercations in the future. But since then the matter is in court and no solution is coming out of the process even when both the parties are ready to accept any court decision.

You can see sadhu and saints coming out in open for demanding Ram Mandir every time elections are round the corner. We really need people and leaders who believe in solution to these problems rather continuing them for electoral gain.