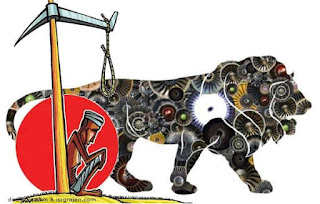 Job creation is at all time low, small business are gasping for breath, Make in India has not shown any significant investment and projects like Skill India and Startup India failed to benefited those for which it was made. Malnutrition deaths are on the rise because after Aadhar linking, only one whose thumb impression is registered is eligible to receive food but when they are bed ridden or thumb mark is unacceptable by the machine for any reason they are unable to get these items. Farmers’ suicide is also on rise but what they are boosting is their improvement in Moody’s rating.

I would be more than happy if reality somewhere matched that rating or even there is talk in nation about some development or human life improvement programs. Sadly what the nation is concerned about right now is history of Padmavati and whether our government should let this movie run or ban it. Other concerns include Ram Mandir (favorite election issue for more almost 30 years now), Triple Talaq, Hardik Patel sex CD, etc. More shocking is absence of ‘Development Model’ from the election of that state which gave us a Prime Minister who only boosted ‘Gujarat Model ‘of development.

It is disheartening that businesses are going down, jobs are not generating and the nation is run by futile Whatsapp and Facebook propaganda. Many people actually believe the rumors spread through these social media platform as true which is further deepening the divide between Hindus and Others (as they called to Muslims and Christian). I know my small article won’t change anything but I will keep on sharing my grief on national integrity breaking to put forth my concerns. Till next post God Bless India.