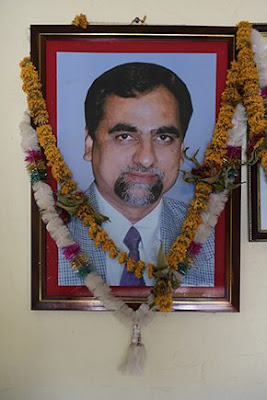 If this news can’t raise your eyebrows and instill fear in you nothing can. If a judge constitutionally responsible for giving justice and who has and the people around him have some protocols to follow died in such a mysterious way how much our lives are important? I am talking about the recent story of The Caravan Magazine by journalist Niranjan Takle of death of Judge Brijgopal Harkishan Loya who was presiding over Sohrabuddin Encounter Trial in which BJP President Amit Shah was an accused then because after his death on 1st December 2014 Amit Shah was removed from all the charges by the new judge on 30th December 2014.

Neither I nor the report accusing anybody but the procedure followed and things happened after his death. It was reported that he was died of a cardiac arrest while he has no previous history of any heart ailment. Secondly his postmortem was conducted without informing his family about his death and his body was taken to his village instead of Mumbai where he lived with his wife & son. Nobody knows why this happen and nobody ever ordered any inquiry in the matter. There are many other things which was neglected or not probed by any agency. Many questions are unanswered like:
These and many other points are raised by the family in conversation to the journalist which you can read in the detail report here. (A Family Breaks Its Silence: Shocking Details Emerge In Death Of Judge Presiding Over Sohrabuddin Trial). My question is to the silence of media who was discussing ‘Padmavati’ on prime time in their Newsrooms with none other than Karni Sena. My question is also to the Supreme Court and other courts that are silent on the suspicious death of their fellow judge. We have watched this happen in movies where people who were against some politician or party leader were either killed or threatened to silence or bribed. We have the right to know what has happened in this case.

Who killed justice Loya? Because from the way all things take place it is clearly not a simple case of heart attack death but something more suspicious, mysterious and doubtful. Those who are reading this must read the detailed Caravan Magazine story which is available in both Hindi & English and must react to the incident not just to ensure Justice Loya’s family that we are with them but to ensure ourselves that Victory lies ahead of fear.
Amit Shah current affairs doubtful Justice Brijgopal Harkishan Loya Niranjan Takle Sohrabuddin fake encounter suspicious The Caravan Magazine