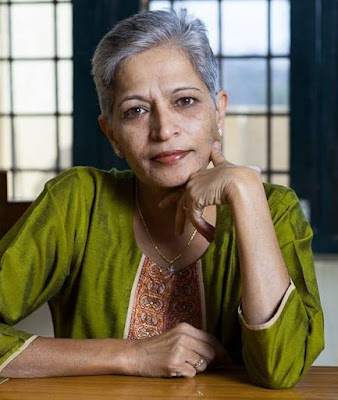 Senior journalist, editor and activist Gauri Lankesh, 55, was shot dead by unidentified assailants at the entrance of her home in Bengaluru West on Tuesday evening. Four bullets were pumped into the editor of the Kannada weekly Lankesh Patrike at her doorstep after she had stepped out of her car and opened the gates to her home which lay in darkness at around 8 pm.(The Indian Express)

This is not the first time that a rationalist is killed. Narendra Dabholkar, Govind Pansare, M.M. Kalburgi all rationalist, disbeliever of superstitious practices of Hindutva and dissenter of RSS all were killed allegedly by Hindu fundamentalists who remain uncaught by the police in all these years. Gauri Lankesh was also opponent of Hindutva and work actively for naxals, women and dalit rights. The Congress party who is actively criticizing the BJP now for her killing should remember that all of them were killed under Congress ruled states and in spite of criticism shown by them, they haven't able to track the criminals.

Voice of dissent is in danger and we must not avoid this killing as an incident in Karnataka because if you oppose religion and has rational thinking then you are also in danger. RSS/BJP supporter actively enjoying the killing of Gauri Lankesh on social media which should also come under criminal offense. Gauri Lankesh could be seen in news debates opposing the topics usually supported by RSS/BJP. In recent days, Gauri Lankesh was actively involved in bringing many persons involved with the Naxal movement in Karnataka back into the mainstream with the co-operation of the Karnataka government.

I appeal Karnataka government which has formed a Special Investigation Team (SIT) on the murder to monitor speedy probe of the issue. Other pending cases of Dabholkar,Pansare, Kalburgi should also be probed speedily. Where is the police teams they show in Crime Patrol which honestly without any pressure solves crimes? This is the time to condemn her death and stood for her beliefs. We must pressurize the government to solve her murder case quickly and raise our voices for such acts. India is not build in last three years and neither by a party, a leader, a family, a religion or an ideology. It is the amalgamation of all these and the quality of people to accommodate each other which make India great. Till next post. God Bless India.
BJP-RSS congress Crime Patrol Dabholkar dissent Gauri Lankesh Hindutva Kalburgi Karnataka Naxal movement News Pansare rationalist SIT