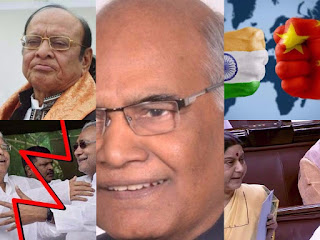 We got our 14th President this week Ramnath Kovind and I am sorry to say except he is from Teli community which belongs to Schedule Caste list in Gujarat I knew nothing about him. This community is 26-27% in Gujarat which is bound to poll this year so this could be seen as strategy to lure that community voter and also Dalits who are drifting from BJP after violence on them bu so called Gau Rakshaks. Anyway I will read more about him in coming days to know our President more but at the present scenario I have no doubt in saying that he will be the rubber stamp President for the government. I will be more than happy if he proves me wrong.

As far as foreign policy is concerned India has dwindled in past three years of Modi government. China and Pakistan who were friendly earlier on bilateral relationship are now showing eyes to the country. Recently China government attacked India’s stand on Doklam region of Bhutan and warned them of dire consequences if India army doesn’t step back. Unconfirmed news also talks about Indian casualties in that area. We only hope situation improves not only with China but also in Kashmir where most of the people have lost their faith in the central and the state government. Here praying for 39 Indians who disappeared in Iraq and are still untraceable to the government.

Congress has another setback this time in Gujarat where Shankar Singh Waghela their most trusted leader left the party and joined BJP. Three more MLAs followed him.This time also BJP is not facing any tough opposition in Gujarat which means their victory is eminent. But the biggest news of the week or I should say of the year is Nitish Kumar’s resignation as a Mahagadhbandhan CM and then swearing in as a JDU-BJP alliance CM. Nitish Kumar has been unpredictable in the past too but here when he was criticizing Narendra Modi and his government on various issues and formed an alliance with RJD-Congress to stop the communal forces his move to collaborate with him is surprising.

Income Tax, ED and CBI are inquiring about Lalu Yadav, Tejaswi Yadav and their family involvement in corruption then why Nitish who didn’t even demand his deputy’s resignation was in so haste to align with BJP. They say that politics has no permanent enemies or foes but situations which decide the course of action. It is now up to Bihar citizen how to react in the situation. Lots of things are happening in the country and the world and we must keep an eye on each one of them to remain acquainted with the present and possible future. Good Bye. God Bless India.