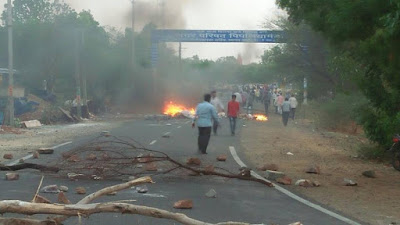 There is an old Hindi song from the movie Mazdoor(1983) which says ' Hum Mehnatkash Is Duniya Se Jab Apna Hissa Mangenge, Ek Baagh Nahin Ek Khet Nahin Hum Saari Duniya Mangenge'  it means that working class if ever ask for its share from the world then it wouldn't be just a garden or a field but the whole world. It in simple language implies that the world is created by working class and they have complete right on each and every thing. This song resonates in my mind yesterday (6th June 2017) when I watched the news of farmers killing in Madhya Pradesh's Mandsaur who are protesting for increase in MSP (Minimum Support Price) which is less than their actual cost of production.

At least 6 farmers killed in this police firing and many injured. I didn't understand why the need for firing on farmers arise who were protesting for their rights. We say that farmers are important to us because they provide us food but in the name of facilities to their service to nation governments have given them nothing. Farmers' suicide is at all time high. In last three years of Modi government it has increased up to 40% in spite of various promises like increase in MSP by this government. Unless these announcements on rallies become reality on papers nothing could help the farmers. The middle class the so called lifeline of the country who feel like fighting on borders in case of killing of soldiers didn't feel the boil in their blood in the case of farmers killing.

The unrest in farmers is not new. It was constant in all governments in last fifteen years with around 234642 farmers suicide in India highest in states of Maharshtra (56215), Madhya Pradesh (19278) and Chattisgarh (16153) two of these states (MP and Chattigarh) are ruled by BJP in these fifteen years. Don't we have concern for our farmers? Didn't we at the time of framing policies consider farmers first? If not then it's a serious issue because we don't have either a second option for their employment and the country where unemployed are increasing alarmingly creating more unemployed will double the problem.

I strongly condemn these farmers killing in Mandsaur and appeal the governments for loan waiver. If Uttar Pradesh can waive off farmers' loan then why not these states which are also ruled by BJP. Media houses which are ignoring such important issue should introspect on their credibility. Licking government boots will only instill misinformation in minds of the people. I also like to appeal citizen of this country to make your opinion about an issue by collecting information from different sources rather than depending on one channel or newspaper or social media. Till next post God Bless India.
current affairs farmers suicide farmers' killing Loan waiver Mandsaur middle class MSP News