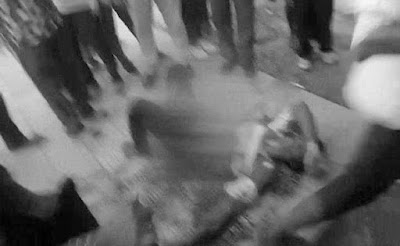 An aged man keeping meet in home, a milkman transporting cattle for milking, rumors of child kidnapper, a policeman conducting his duties or you just innocent Muslim boys going home for Eid, this give enough reason to criminal mobs to lynch innocents without any respect and fear for the law. From last three years since the Modi government came in power these lynching of innocent people by mob has increased manifolds many of which are conducted by radicalized Hindu youths in the name of protecting ‘Mother Cow’ and their tradition forgetting about innocent humans they have killed in this process. Latest incident happened with three Muslim brothers going home in a train from Delhi to Mathura after Eid shopping in Delhi.
A group of 10-12 men between 7-8 pm attacked them and stabbed one Junaid to death while two others are battling for life in Delhi hospital. The brutality with which they were attacked and the hatred filled in the criminal mob can be judge by seeing the blood painted compartment of the train they traveled. Yesterday a lynching incident also happened in Kashmir when Mohammad Ayub Pandit a police officer with J & K police lynched by the mob when he opposed protesters & stone palters. J & K which says itself different from mainland India shows similarity with rest of India with this lynching incident. Uttar Pradesh, Rajasthan, Gujarat, Assam, Jharkhand or wherever these incidents take place the state as well as central government neither condemning it strongly nor taking strong actions against the accused as a result they are becoming more and more dangerous.

Nothing could be more condemnable than the attack on innocent people whether it’s Mohammad Akhlaq, Pehlu Khan or Una Dalits their identity as Indians were questioned in these attacks. PM of India is showing dreams of New India to its billions of population; I just want to ask him, is the new India he is boosting filled with anger and frustration enough to kill innocent people? Are the blood stained hands requisite to enter this new India? If not then he should broke his silence on these issues. India has a rich heritage and tradition one regime can’t curb it but can disturb it for the time being. The Us versus Them mentality has creating animosity between the communities and the castes resulting in nothing but hatred and as we know hatred must bring hatred not love. People must use their conscience to tackle these emotional issues used to instigate to kill eachother. We are not criminals so we must work to stop this #LynchRaj.
current affairs Delhi-Mathura Lynch Raj Mob Lynching Mob Violence Modi Sarkar Mohammad Ayub Pandit Us vs Them