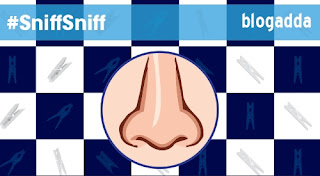 Metro man S. Sreedharan would have highlighted many problems during conceptualization of Metro Rail in Delhi but I bet he haven't thought of the odour problem in the overcrowded coaches of the metro. There is no doubt about the efficiency of Delhi Metro in tackling with so many passengers daily but I doubt their ability to deal with odour of different varieties. Women are lucky to have their coach reserved for them which gave them space to breath and at least not poke nose in some body's armpit when the train jerk to stop.

They say that love begins in the heart and smell begins in the nose. Nose knows best about the good or bad smell and directs brain to take decision accordingly. Once while travelling in the overcrowded Delhi Metro I encountered an incident for which my nose still curses me. After boarding the metro from a deserted station of my area for Shahdara almost the last station of the Red Line of Metro, heap of people entered from all doors at Kashmere Gate metro station the most crowded station due to the part of underground Yellow Line. Anyways details of the station and metro was not important but what happened after that was more interesting.

A man dressed nicely came and stood near me, his looks and appearance was not lesser than a gentleman but his body odour , OMG! He must be on bath diet for days. It was unbearable to stand by his side. The deodorant or powder he used to hide that smell of his body betrayed him badly when he raised his arms to grip handle bar on metro coach's roof. The body odour + deodorant or powder smell + his current sweat = Gave way to a bomb of foul smell which exploded in my nose convincing me to stop at whichever station came next.  I deboarded that coach by the order of the odour at the next station and entered in another coach, going to another coach without exiting that one was impossible due to the crowd.

I breathed a sigh of relief because I would have fainted at that moment due to suffocation if I would have remained near him. That was a strange bad body odour which I haven't experienced before or after that incident. Overcrowded metro do put you in pool of bad odours but you can manage with them but that odour was out of order to tolerate. My Nose Knows best which smell is good for me and I thanked her for acting promptly in that tough situation.

I am sharing my odour story for the ‘My Nose Knows’ contest as a part of the #SniffSniff activity at BlogAdda.”
BlogAdda contest Delhi Metro Kashmere Gate Memoir S. Sreedharan Shahdara Sniff Sniff activity sweat